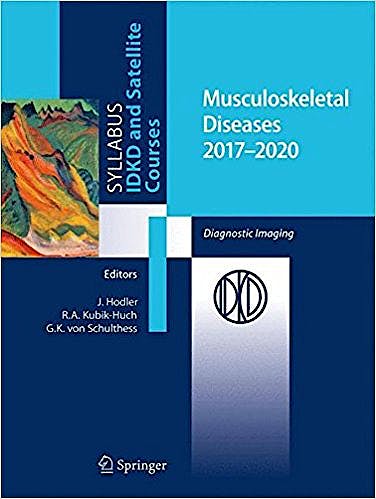 This book focuses on with musculoskeletal imaging: during the last few years, there have been considerable advances in this area, driven by clinical as well as technological developments. The authors, internationally renowned experts in their field, have contributed chapters that are disease-oriented and cover all relevant imaging modalities, including magnetic resonance imaging, computed tomography, and positron emission tomography. As a result, this book offers a comprehensive review of the state of the art in musculoskeletal imaging. It is a valuable resource for general radiologists, radiology residents, rheumatologists, orthopaedic surgeons, and clinicians from other specialities wishing to update their knowledge in this discipline.

Rahel Kubik-Huch earned her medical degree and doctorate from the University of Zurich in 1991 and her titular professorship for diagnostic radiology in 2005. She completed her residency in diagnostic radiology at the University Hospital of Zürich, Switzerland, where she subsequently worked as senior physician. Since 2002 she has worked at the Kantonsspital Baden, Baden, Switzerland, where she was appointed head of the Institute of Radiology and director of the Dept. of Medical Services in 2005. In 2010, she also became a member of the executive board of the hospital. Her specialist focus is magnetic resonance tomography (especially breast, abdominal and genitourinary imaging) and breast imaging (all modalities, including breast MRI and interventions under imaging guidance). She has published numerous research articles in peer-reviewed journals, contributed to several book chapters and received a number of scientific awards, including the Swiss Society of Radiology Anniversary Award (“Jubiläumspreis”). She is a course co-director of the International Diagnostic Course Davos (IDKD), course advisor for the Breast Imaging Satellite Course, Pearl of the IDKD and a former organizer of the Advanced Breast and Pelvis Imaging Course at the ESMRMB where she has remained a member of the faculty.