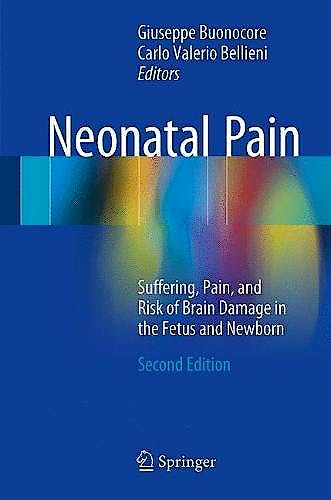 Neonatal Pain. Suffering, Pain, and Risk of Brain Damage in the Fetus and Newborn

This completely revised and updated edition offers a comprehensive overview of neonatal pain assessment and treatment. It includes the field of fetal surgery, and many other topics have been updated or added, such as circumcision analgesia, new drugs, new insights intoneurophysiologic pathways of neonatal pain and new drawbacks of analgesic drugs. While in the early years of the 21st century pain treatment in neonates was still optional, it is now a tenet, and more and more institutions are looking for inspiration and good references to create their ownguidelines. Written by leading researchers in the field, this book provides that inspiration and offers a valuable tool for neonatologists, anesthetists, nurses and physiotherapists. Since it also deals with prenatal and postnatal surgery, it also appeals to surgeons

Giuseppe Buonocore is full professor of Pediatrics and Director of the Unit of Neonatology of the University Hospital of Siena. He is involved in the coordination of numerous pan-European clinical trials, as for example of the European scientific network EURAIBI (acronym for EURopeAgainst Infant Brain Injury). His research interests are in the mechanisms of cell damage in the neonatal brain, with special reference to hypoxia, the role of oxidant radicals in neonatal diseases and in babies with birth asphyxia. Additional research interest fields are ethics in perinatologyand fetal and neonatal pain prevention. His research team is funded by several agencies including the Italian Ministry of University and Scientific Research -cofinance scheme for research projects of high national interest as well as European Community : NEOBRAIN project. Author of more than 100 scientific publications in international journals with IF ("Pediatric Research", "Biology of Neonate", "Free Radical Biology and Medicine","Acta Paediatrica", "Archives Diseases in Children", " Journal of Pediatrics" and others). He is Past-President of the European Society forPediatric Research, and currently a member of the Editorial Board of "Biology of Neonate".