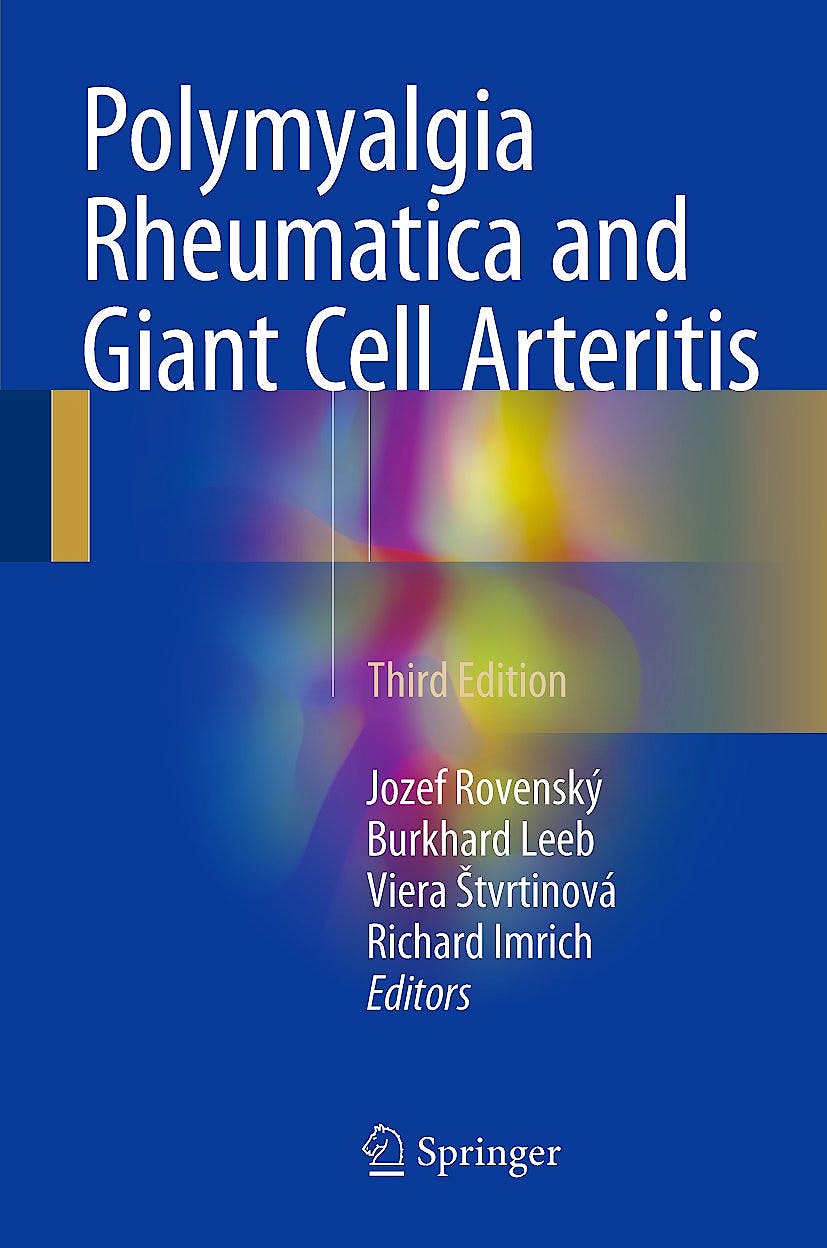 This book, now in an extensively updated and expanded third edition, offers important insights into polymyalgia rheumatica (PMR) and giant cell arteritis (GCA), providing an overview of their pathophysiology, genetics, immunology, and endocrinological mechanisms but above all presenting the state of the art in diagnosis and treatment.  Both PMR and GCA are diseases of advanced age. Early diagnosis and treatment can save one of the most precious senses – vision. In this book, the role of imaging techniques is thoroughly examined, with particular attention to ultrasonography and FDG PET. All aspects of management of both diseases are discussed, including the current use of glucocorticoids, the efficacy of modern biological treatment, such as infliximab, tocilizumab, and rituximab, and the available monitoring tools. Diagnostic criteria for PMR and GCA are outlined, with discussion of differential diagnosis. Among the other topics addressed are disease classification, the histopathology of GCA, the ACR criteria for temporal arteritis, the value of temporal artery biopsy in GCA, serum cytokine profiles, chronobiology, and sine syndromes. The reader will find that the book aids in achieving early diagnosis and providing faster and more effective disease management. General readers with an interest in rheumatology, internal medicine, ophthalmology and gerontology will find this book particularly valuable.

Jozef Rovenský, MD, PhD, DSc, graduated in Medicine from Masaryk University, Brno, Czech Republic in 1966 and subsequently completed specializations in Internal Medicine, Rheumatology, and Clinical Immunology at the Postgraduate Medical School, Bratislava, Slovak Republic. He was awarded his PhD from the School of Medicine (Internal Medicine), František Palacky University, Olomouc, Czech Republic and his DSc from the School of Medicine (Internal Medicine), Comenius University, Bratislava, Slovak Republic. In 1990 he was appointed Director of the Research Institute of Rheumatic Diseases, Pieštany, Slovak Republic and in 1991 became Associate Professor of Internal Medicine at Masaryk University. In 1993, Dr. Rovenský was awarded the Silver Medal of the Slovak Medical Society for contributions to medical activity and in 1995 he was appointed Professor of Internal Medicine at Masaryk University. He has served on the editorial boards of various journals, including Clinical and Experimental Rheumatology, and is a member of the Advisory Committee for Annals of Rheumatic Diseases. He is the author of more than 200 publications.

Burkhard F. Leeb, MD, PhD, is Director of the 2nd Dept. of Medicine, Center for Rheumatology, Lower Austria State Hospital in Stockerau, Austria, Director of the Karl Landsteiner Institute for Clinical Rheumatology and is affiliated with the Medical University of Graz and the Karl Landsteiner Private Medical University in Krems. He graduated from the Medical Faculty, University of Vienna, in 1981 and later completed specializations in Internal Medicine and Rheumatology. Dr. Leeb was a board member of the Austrian Society for Rheumatology and Rehabilitation from 1998 to 2012, and served as President of the Society from 2008 to 2010. He served as the co-chairman of the polymyalgia rheumatica subcommittee for ESCISIT (EULAR standing committee for clinical trials, including therapeutic trials) and co-convenor of the EULAR task forces for recommendations on the management and diagnosis of hand osteoarthritis. Dr Leeb has received various awards, including the Wyeth Scientific Award from the Austrian Society for Rheumatology and Rehabilitation (in 2009). He is an associate editor for BMC Musculoskeletal Diseases and Frontiers in Rheumatology and an editorial board member for various other journals. He has authored 185 publications in journals and books. Dr Leeb is currently chairman of BioReg, the Austrian Registry of Biologicals for the treatment of inflammatory rheumatic diseases.

Viera Stvrtinova, MD, PhD at Comenius University Hospital in Bratislava, graduated from the Medical Faculty in 1983, completing degrees in internal medicine (1987), cardiology (1992) and angiology (2003). In 1996 she became an associate professor and in 2001 a full professor of internal medicine. Since 1983 she has been working at the 2nd Clinic of the Internal Medicine University Hospital in Bratislava, from 2001 as a full professor of internal medicine. She is currently head of the Outpatients Department of Angiology and responsible for angiological patients at the Inpatients Department of the 2nd Clinic of Internal Medicine.
From 2011 to 2015 she served as Vice Dean for Science and Research at the Medical Faculty of Comenius University in Bratislava, where she has been Vice Dean for Education since 2015.
She is also Vice-President of the Central European Vascular Forum (CEVF), President of the Slovak Angiological Society of the Slovak Medical Association, Member of the Executive Board of the International Union of Angiology, Correspondent Member of the German Society of Phlebology, and an Honorary Member of the Czech Angiological Society.
She has published 7 books, 519 publications (articles and abstracts) in scientific journals (334 in national Slovak journals), and has 686 citations.
She is an associated editor of CEVF in the journal International Angiology, and a member of the editorial committee for the Slovak journals Vascular Medicine, Practical Phlebology, Derma and Rheumatologia.

Richard Imrich, MD, DSc is head of the Laboratory of Human Endocrinology, Biomedical Centre, Slovak Academy of Sciences. He has previously served as Vice-president of the Slovak Academy of Sciences (2013-2015) and as director of the Center for Molecular Medicine, Slovak Academy of Sciences (2007-2013). He was also a member of the Clinical Neurocardiology Section, National Institute of Neurological Disorders and Stroke, National Institutes of Health, Bethesda, USA until 2008.In 2004 he worked at the Neuroendocrine Immunology Lab, Dept. of Pharmacology, Free University of Brussels, Belgium, and in 2003 he won both the Slovak Society of Rheumatology Award and the European League Against Rheumatism (EULAR) Training Bursary. In 2004 he also won the Jonas Bohumil Guoth Award of the Slovak Medical Society Presidium. In 2006 he was nominated Young Scientist of the Year by the Slovak Ministry of Health. He has engaged in numerous Research Projects, and has authored over 80 papers as well as diverse books and book chapters.