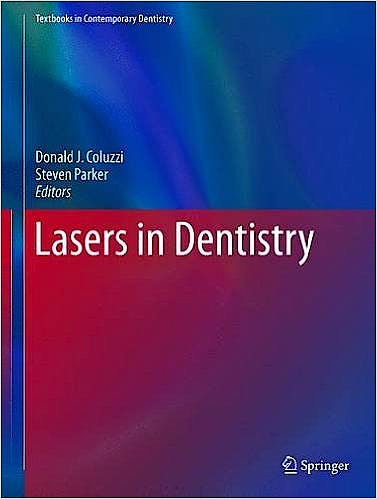 This book provides information on the basic science and tissue interactions of dental lasers and documents the principal current clinical uses of lasers in every dental discipline. The applications of lasers in restorative dentistry, endodontics, dental implantology, pediatric dentistry, periodontal therapy, and soft tissue surgery are clearly described and illustrated. Information is also provided on laser-assisted multi-tissue management, covering procedures such as crown lengthening, gingival troughing, gingival recontouring, and depigmentation. The closing chapters look forward to the future of lasers in dentistry and the scope for their widespread use in everyday clinical practice.When used in addition to or instead of conventional instrumentation, lasers offer many unique patient benefits. Furthermore, research studies continue to reveal further potential clinical applications, and new laser wavelengths are being explored, developed, and delivered with highly specific power configurations to optimize laser–tissue interaction. This book will bring the reader up to date with the latest advances and will appeal to all with an interest in the application of lasers to the oral soft and/or hard tissues.

Donald J. Coluzzi, DDS, a 1970 graduate of the University of Southern California School of Dentistry, is an Clinical Professor in the Department of Preventive and Restorative Dental Sciences at the University of California  San Francisco School of Dentistry. He ran his own private practice of general dentistry in Redwood City, CA; and retired from it after 35 years. He is a life member of both the California Dental Association and the American Dental Association.  He has served as a past president of the Academy of Laser Dentistry, received its Leon Goldman Award for Clinical Excellence, and is a past editor-in-chief of the Journal of Laser Dentistry. He has used dental lasers since early 1991 and holds Advanced Proficiency in Nd:YAG and Er:YAG wavelengths. He is a Fellow of the American College of Dentists, a University of California certified Dental Laser Educator, and is a member of Omicron Kappa Upsilon, the national dental honor society. He serves as a reviewer for several journals, and is a founding associate of Laser Education International. He recently received the outstanding faculty member award from the American College of Dentists. Dr. Coluzzi has presented about lasers worldwide, co-authored two textbooks, and published several peer-reviewed articles and book chapters.

Dr. Steven Parker studied dentistry at University College Hospital Medical School, University of London, UK and graduated in 1974. Dr. Parker has been involved in the use of lasers in clinical dentistry since 1990. He is closely involved in the provision of education in laser use in dentistry. He served as President of the Academy of Laser Dentistry in 2005-6. In addition, Dr. Parker holds Advanced Proficiency status in multiple laser wavelengths. He was awarded Mastership of the Academy of Laser Dentistry in 2008. Awards gained with the Academy of Laser Dentistry have been the Leon Goldman award for excellence in clinical laser dentistry (1998) and the Distinguished Service Award (2010). From 2010, he has served an appointment as Professore a contratto in the Department of Surgical Sciences and Integrated Diagnostics, University of Genoa, Italy. He also acts as International Coordinator and lead faculty of the Master of Science (Master Livello II) degree programme in laser dentistry at the University of Genoa. Dr Parker has contributed chapters on aspects of laser use in dentistry in several text books and multi-media platforms. Additionally, he has received publication of over 40 peer-reviewed papers on the use of lasers in dentistry, including a series “The Use of Lasers in Dentistry” published in the British Dental Journal in 2007 and later as a textbook. He was the dental consultant to the UK Medical Health Regulatory Agency (Dept. of Health) in the 2008 (Revised 2015) publication "Guidance on the safe use of lasers, intense light source systems and LEDs in medical surgical dental and aesthetic practices”. He serves as associate-editor of the Journal of Lasers in Medical Science. In addition, he serves as referee for many peer-reviewed dental journals worldwide. He maintains a Private Practice in Harrogate, UK.