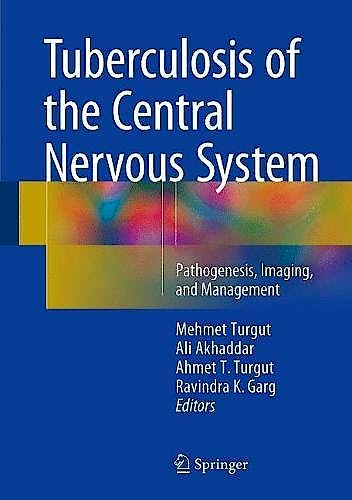 Tuberculosis of the Central Nervous System. Pathogenesis, Imaging, and Management

Written and edited by leading international authorities in the field, this book provides an in-depth review of knowledge of tuberculosis of the central nervous system, with emphasis on clinical, diagnostics, and therapeutic features. Tuberculosis, one of the most lethal diseases in human history, still poses a serious threat in the world together with economic and social problems, although a great progress in the fight against this infectious disease in the last century. It covers the full range of tuberculosis of central nervous system and the chapters are organized into six sections: (1) the cranial; (2) the spinal; and (3) the peripheral portions of the nervous system; followed by (4) a section on the laboratory studies in tuberculosis; (5) a section on medical and surgical therapy; and (6) further insights into tuberculosis. This comprehensive reference book will be an ideal source for neurosurgeons, neurologists and specialists upon infectious diseases seeking both basic and more sophisticated information and surgical procedures relating to the complications associated with tuberculosis involving the spine, brain and peripheral nerves.

Mehmet Turgut, MD, PhD, graduated from the Ege University School of Medicine, Izmir, Turkey and later specialized in neurosurgery in Hacettepe University Hospital, Ankara, Turkey. In 2004, he received the PhD degree from the department of Embryology and Histology, Ege University Health Sciences Institute, Izmir, Turkey. He is currently Associate Professor in the Department of Neurosurgery, Adnan Menderes University School of Medicine, Aydin, Turkey. His fields of expertise and research interests are broad and include developmental neuroscience, pediatric neurosurgery, infectious diseases of the central nervous system, and peripheral nerve surgery. Dr. Turgut is an editorial board member for 17 international journals including Central European Neurosurgery, Journal of Spine, Journal of Pediatric Neurology, Journal of Spine & Neurosurgery, and Journal of Neurosciences in Rural Practice and a reviewer for a wide range of international journals and research programs. He is the lead or co-author of numerous publications in international journals as well as many book chapters and other publications.

Ali Akhaddar, MD, is Full Professor of Neurosurgery at the Faculty of Medicine, Mohammed V University in Rabat (Morocco) and Chairman of the Department of Neurosurgery at Avicenne Military Hospital of Marrakech (Morocco). His research interests include infectious diseases of the central nervous system, degenerative disc and spine diseases, sellar region tumors, as well as medical writing. He is an Expert Member of the Scientific Committees of the National Scientific and Technological Research Center of Morocco (CNRST). Dr Akhaddar is a Member of the American Association of Neurological Surgeons (AANS), the Congress of Neurological Surgeons (CNS), the French speaking society of Neurosurgery (SNCLF) and the Military Neurosurgeons Committee in the World Federation of Neurosurgical Societies (WFNS). He has received many awards during his career, including from the Moroccan Society of Neurosurgery (2007), the World Federation of Neurosurgical Societies (Traveling Fellowship Award: Nagoya 2007, Boston 2009 and Seoul 2013], the University of Mohammed V of Rabat (2011) and the French Society of Hospitals’ History (SFHH) (2014). Dr Akhaddar is a member of the editorial board of the Open Neurosurgery Journal and Médecine du Maghreb and is a reviewing editor for many medical journals. He is the author of four previous books and five book chapters; he has authored and co-authored more than 250 papers published in peer-reviewed journals (more than 140 indexed in PubMed).

Ahmet T. Turgut, MD, is Professor of Radiology at Hacettepe University Faculty of Medicine in Ankara, Turkey. Dr. Turgut’s research interests include oncologic imaging, use of hybrid imaging techniques for early detection of cancers and imaging of central nervous sytem diseases. He has published more than 80 original papers in peer-reviewed journals and has authored 25 chapters in several textbooks in English. He is associate editor of two reference books on genitourinary radiology and pathology. Dr. Turgut serves as associate editor of the Journal of Clinical Imaging Science. So far, he has been reviewer for several many distinguished journals including European Radiology, European Journal of Radiology, British Journal of Radiology and Acta Radiologica. Dr. Turgut has been invited to be a guest speaker at more than 80 distinguished scientific meetings including European Congress of Radiology and International Congress of Radiology. He served as the Congress President in ESUR 2013, 20th Annual Meeting of ESUR held in Istanbul, Turkey. He has been honoured as elected-fellow of the ESUR in 2006. He served as executive board member and general secretary of the Turkish Society of Radiology from 2011 to 2013. Dr. Turgut has been co-chair for Eurasian Radiology Initiative, an international project which is believed to help access to the state of the art radiology knowledge and improving the standards of radiology practice in this part of the World.

Ravindra K. Garg, MD, is currently working as professor and Head - Department of Neurology, King George's Medical University Uttar Pradesh, Lucknow India. He has 25 years of teaching/research experience. His areas of interest include central nervous system infections, like, tuberculous meningitis, neurocysticercosis, Japanese encephalitis, dengue viral infections, leprosy and subacute sclerosing panencephalitis. He is a member of editorial board of several premier journals including BMC Neurology, Medicine, Annals of Indian Academy of Neurology and Neurology India. For BMC Neurology he is performing duties of section editor for epilepsy subsection. He has approximately 400 publications to his credit. He edited a multi-authored book on Tropical Neurology. He is active member of many scientific societies like American Academy of Neurology, Neurological Society of India, Indian Academy of Neurology, Indian Epilepsy Association and Physicians' Association of India. Dr Garg has a vast experience of dealing with tropical CNS infections.