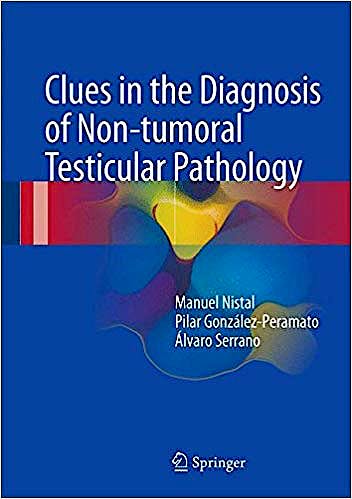 Clues in the Diagnosis of Non-Tumoral Testicular Pathology

This book presents the morphology of different non-tumoral lesions of the testis. By showing the differential diagnosis of each lesion, it offers clinicians vital support with diagnosis and treatment. The book is divided into seven main parts: genetic and developmental pathology of the testis; infertility; vascular pathology of the testis; inflammatory pathology; pathology of the rete testis and epididymis; pathology of the vaginal tunic and paratesticular structures; and a final part dealing with miscellanea. Each chapter includes carefully selected figures and a variety of diagrams highlighting the main characteristics of a specific lesion to facilitate its diagnosis.Based on the authors’ experience with hundreds of biopsies, surgical specimens and autopsies, the book presents material that has been gathered over the past 40 years, providing an essential tool for pathologists, urologists, andrologists and pediatricians who face diagnostic problems.

Professor Manuel Nistal Martin de Serrano received his medical degree in 1966 from the School of Medicine, Salamanca University, Spain and his Ph.D. in 1972 from the School of Medicine, Autonoma University of Madrid, Spain. From 1974-2013, he was the Head of the Pathology department of La Paz University Hospital, Madrid, Spain and full professor of Histology in the department of Anatomy, Histology and Neurosciences, UAM, Madrid, Spain (1983-today). Professor Nistal was emerited in 2013. He has published more than 250 publications in international journals and is an expert in testicular pathology.

Dr. Álvaro Serrano Pascual is Assistant Professor of Urology at the School of Medicine, UAM, Madrid, Spain and works as urologist at the San Carlos University Hospital, Madrid. He received his medical degree in 1983 from the School of Medicine, Extremadura University, Badajoz, Spain and his Ph.D. in 1994. Dr. Serrano Pascual has published 5 books, more than 80 scientific publications and contributed to more than 300 national and international meeting.