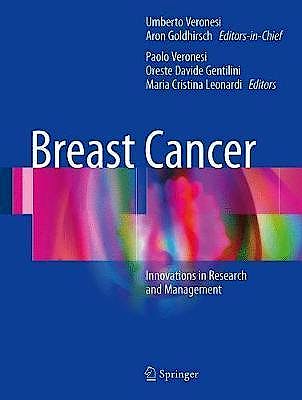 This book provides the reader with up-to-date information on important advances in the understanding of breast cancer and innovative approaches to its management. Current and emerging perspectives on genetics, biology, and prevention are first discussed in depth, and individual sections are then devoted to pathology, imaging, oncological surgery, plastic and reconstructive surgery, medical oncology, and radiotherapy. In each case the focus is on the most recent progress and/or state of the art therapies and techniques. Further topics to receive detailed consideration include particular conditions requiring multidisciplinary approaches, the investigation of new drugs and immunological agents, lifestyle and psychological aspects, and biostatistics and informatics. The book will be an excellent reference for practitioners, interns and residents in medical oncology, oncologic surgery, radiotherapy, pathology, and human genetics, researchers, and advanced medical students.

Umberto Veronesi is Scientific Director Emeritus of the European Institute of Oncology (EIO), Milan, Italy, which he founded in 1994. He was Minister of Health in the Italian Government from 2000 to 2001, and from 2008 to 2011 was a senator of the Italian Republic. Prof. Veronesi has devoted the greater part of his professional career to exploring new pathways of research with the aim of improving the treatment and quality of life of cancer patients, and he is responsible for a range of key innovations. He has also initiated educational enterprises for the training of oncologists, as founder of both the European School of Oncology and The European Society of Surgical Oncology. He has served as President of the International Union Against Cancer, of the European Organization for Research and Treatment of Cancer, and of the Federation of European Cancer Societies. He has been awarded 14 honorary degrees and is recipient of many honors and prizes, including the Gold Medal of the Italian Health Ministry. He is the author of more than 800 scientific publications and 12 oncological treatises.

Aron Goldhirsch is Deputy Scientific Director at the European Institute of Oncology, Milan, Italy. He has served as Co-Chairman of the Scientific Committee of the International Breast Cancer Study Group (IBCSG; formerly the Ludwig Group) and co-founder of the Breast International consortium (BIG). Since 1992 has been Professor for Medical Oncology at the University of Bern, Switzerland. Dr. Goldhirsch has received various international prizes and honors, including the prestigious St. Gallen International Breast Cancer Award (2013), the American Society of Clinical Oncology’s Gianni Bonadonna Breast Cancer Award (2014), and the Komen Brinker Award for Scientific Distinction (co-recipient with Prof. Richard Gelber in 2008). He is the author of over 700 peer-reviewed articles and chapters in reference books, editor or co-editor of ten books, and he serves on the editorial board of several oncology and breast cancer research journals.

Paolo Veronesi is Associate Professor of General Surgery at the University of Milan School of Medicine, and Director of the Breast Surgery Division at the European Institute of Oncology, Milan, Italy. He was deeply involved in the development of breast-conserving surgery and, more recently, in the development of the sentinel lymph node biopsy technique, intraoperative radiotherapy, and conservative mastectomy. Dr. Veronesi was President of the XXXIII Congress of the Italian Society of Surgical Oncology in June 2010. He has been President of the Umberto Veronesi Foundation for the progress of the science since 2005. He is the author of more than 240 papers and 25 book chapters, mainly in the field of breast diseases.

Maria Cristina Leonardi has worked at the Division of Radiation Therapy at the European Institute of Oncology, Milan, Italy since 1997; in 2009 she became Deputy Director of the Division, having previously been Senior Assistant. Her main activities include 3D radiotherapy, intraoperative radiotherapy, intensity modulated radiotherapy and image-guided radiotherapy and she has been involved in numerous clinical studies involving breast and rectal cancer. Dr. Leonardi graduated in Medicine from the University of Milan in 1992 and subsequently completed her specialization in Radiation Oncology in 1996 at the Istituto Nazionale Tumori, Milan. She is a Member of the Italian Radiation Oncologists (AIRO) Breast Cancer Group and co-author of the Italian Guidelines on Breast Cancer. Currently, she is the national coordinator of the AIRO Working Group on Intraoperative Radiotherapy.

Oreste D. Gentilini was born in 1968. After 15 years at the European Institute of Oncology is now Head of Breast Surgery and Director of the Breast Unit at the San Raffaele University and Research Hospital, Milano. His interest and research commitments have focused on sentinel lymph node biopsy, breast cancer in young women, breast cancer during pregnancy and the possibility of extending the fields of breast conservation in special clinical scenarios. Dr. Gentilini is Chairman of the SOUND (Sentinel node vs Observation after axillary Ultra-souND) prospective, randomized, multicentre, international trial and author of more than 100 papers.