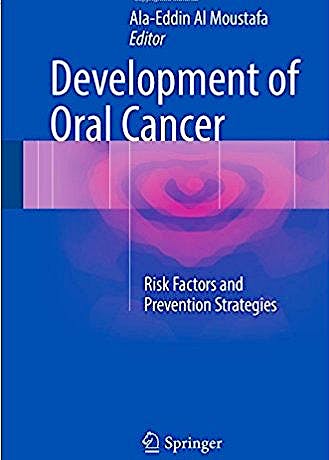 This book aims to provide the reader with a complete understanding of the development of oral cancer by explaining the role of a wide variety of implicated risk factors and identifying their gene targets and key regulators. Some of the discussed risk factors are well known, including smoking, alcohol, betel quid chewing, and oncoviruses such as high-risk human papillomaviruses and Epstein-Barr virus; however, careful attention is also paid to less widely recognized factors, such as Qat chewing and yerba Mate consumption. The book concludes by describing and evaluating the most important strategies currently available for the prevention of oral carcinogenesis in humans. In presenting the most up-todate research and knowledge on these topics, this book will serve as a valuable source of up-to-date information for oncologists, cancer scientists, and medical students.

Ala-Eddin Al Moustafa currently works, as a Professor/Principal Investigator, in the area of Cancer Biology & Metastasis at the College of Medicine, Qatar University, having previously been a project director at the Lady Davis Institute for Medical Research (LDI) and assistant professor in the Oncology Department of McGill University (Montreal, Canada). Dr. Al Moustafa gained a Master’s degree and a PhD in the field of Oncogenes in the Embryo from the Institute of Embryology of the CNRS and Collège de France and Paris XIII University in 1988 and 1992, respectively, and subsequently completed his training as a postdoctoral fellow at the LDI. He was responsible for founding the Middle-Eastern Association for Cancer Research in 2010 and the Association’s journal (Clinical Cancer Investigation) in 2011. He has published more than 70 international journal papers and book chapters. Dr. Al Moustafa’s research focuses especially on the roles of oncogenes, gene cooperation, and oncoviruses in human carcinogenesis and metastasis.