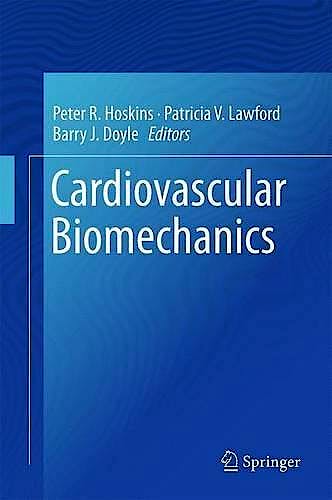 This book provides a balanced presentation of the fundamental principles of cardiovascular biomechanics research, as well as its valuable clinical applications. Pursuing an integrated approach at the interface of the life sciences, physics and engineering, it also includes extensive images to explain the concepts discussed.

With a focus on explaining the underlying principles, this book examines the physiology and mechanics of circulation, mechanobiology and the biomechanics of different components of the cardiovascular system, in-vivo techniques, in-vitro techniques, and the medical applications of this research.

Written for undergraduate and postgraduate students and including sample problems at the end of each chapter, this interdisciplinary text provides an essential introduction to the topic. It is also an ideal reference text for researchers and clinical practitioners, and will benefit a wide range of students and researchers including engineers, physicists, biologists and clinicians who are interested in the area of cardiovascular biomechanics.

Peter Hoskins is professor of medical physics and biomechanics. He trained in Physics and has spent 30 years in developing new methods for diagnosis in arterial disease. This initially involved imaging-only methods including ultrasound and MRI. In the late 1990s, realising thelimitations of imaging-only methods he developed a parallel research activity involving the integration of 3D medical imaging (ultrasound, CT, MRI) with computational modelling. Unusually in this area Hoskins comes into biomechanics from an imaging background rather than a modelling background, and from a patient care background rather than a pure fluid/solid mechanics background. Hoskins set up an MSc in biomechanics which has been live since 2011 and the MSc is now in its second year. He has written 41 first author peer-reviewed journalarticles and 21 first author chapters. He was lead editor on three books including a major textbook (Diagnostic Ultrasound - Physics and equipment) which is in its second edition (2009). He has also been principal editor on three journal special issues including two recent; one onultrasound elastography and the other on patient specific modelling.

Pat Lawford is Professor of Physiological Modelling. She has spent 35 years in cardiovascular biomechanics including experimental techniques and modelling and is centrally involved in recent efforts in the 'Virtual Physiologic Human' project. She is a biologist by training and brings that understanding to her work in biomechanics. This biological background will complement the physics and engineering background of the co-editors. She has extensive teaching experience. This includes 25 years’ experience in MSc teaching to medical physics including 15 years as programme director. She is currently involved in leading postgraduate taught courses within the Faculty of Medicine. She is also a member of a new Institute for in-silico measurement (Insigneo) where she is involved in developing postgraduate taught courses.

Barry Doyle is a Research Fellow of cardiovascular biomechanics. He trained in Bioengineering and has successfully established himself as a figure in the area of patient-specific modelling. To date, he has published the following as first author: 12 journal articles, one full book,two book chapters, and 31 peer-reviewed conference proceedings. He has published numerous other works as co-author. The majority of his publications are within the top 10 percentage of most frequently cited in their area, with one particular publication in the top 20 most citedarticles since 2009, and also in the top ten most cited papers on aneurysmal biomechanics. His works has received many awards, most notably, the Mimics Innovation Award in 2009 for his work on cardiovascular biomechanics. Doyle was appointed as Honorary Fellow of TheUniversity of Edinburgh in 2010 in recognition of his research efforts.