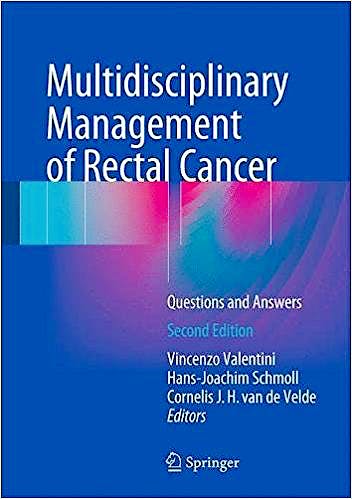 In this book, a distinguished group of clinicians provide straightforward, focused answers to the questions most commonly confronted by a multidisciplinary team when caring for patients with rectal cancer. The format of the book is designed to aid optimal decision making in a multidisciplinary setting with respect to key issues in imaging, radiotherapy, chemotherapy, and surgery, all of which are considered in detail. Helpful guidance is also offered on risk factor identification, pathology procedures and their prognostic value, and multidisciplinary team management. The authors have been carefully selected for their expertise, and most have been involved in the management of the more significant trials published in Europe during the past decade.

In an era in which all patients are entitled to access healthcare systems that deliver the highest quality of treatment within a safe environment, together with appropriate advice, support, and long-term follow-up, the multidisciplinary team is of central importance. This successful book, in its revised and updated second edition, is designed to provide all the guidance likely to be required by members of the multidisciplinary team at various stages of the pathway of care for patients with rectal cancer.

Hans-Joachim Schmoll, MD, is professor of Internal Medicine and Medical Oncology/Hematology at Martin-Luther-University Halle-Wittenberg, Department of Internal Medicine, previous chairman of the Department of Oncology and Hematology, and current Chair of the Division of Clinical Oncology Research. olor: rgb(31, 73, 125); font-family: Calibri, sans-serif Dr. Schmoll was appointed 1984 as Chairman of the Division of Medical Oncology at the Medical University Hannover, and 1995 as a Chair of the Division of Hematology/Oncology at the Department of Internal Medicine, Martin-Luther-University Halle-Wittenberg, Germany. He is Past President of the AIO of the German Cancer Society and has developed within the AIO 30 multidisciplinary working groups for Clinical Trials in all fields of Oncology. He was founding Chair of the Testis and the Colorectal Cancer Study Group of the AIO, and founding Chair of the European Germ Cell Cancer Cooperative Group which developed the first International Multidisciplinary Consensus Guideline for the management of Testicular Cancer. He also served as Chair of the first International Multidisciplinary Comprehensive ESMO-Guideline for the management of Colon and Rectal Cancer in 2012. He served as Chair of the Multidisciplinary Oncology Committee in the Executive Board of ESMO for several years and was Scientific Chair of the ESMO Congress in Istanbul in 2006. He is also editor of Standard Reference Book for Medical Oncology in German speaking countries, and was Editor-In-Chief of Oncotargets and Therapy as well as Oncology. Currently he is Editorial Board Member and/or Reviewer of several high-impact Oncology journals, including JCO, Lancet Oncology, New England Journal of Medicine, Nature Reviews Clinical Oncology, etc. He is Honorary Member of the German Society of Hematology/Oncology, of the AIO of the German Cancer Society and of the Hungarian Cancer Society as well as Hungarian Society of Medical Oncology and the Hungarian Society of Oncology. He is also founder and president of the Cancer Society of the state of Saxony-Anhalt in Germany. To date he has authored/coauthored more than 435 publications.

Cornelis J.H. van de Velde, MD, PhD, FRCPS, FACS(hon), is Professor of Surgical Oncology at Leiden University Medical Center, Leiden, the Netherlands. Dr. van de Velde is a member and Past President of the Dutch Royal Academy of Sciences. He founded and was the first Chairman of the Dutch Colorectal Cancer Group, the Dutch Gastric Cancer Group, and the Dutch Breast Cancer Group. He is a Past President of the European Society of Surgical Oncology and served as President of ECCO, the European Crohn’s and Colitis Organisation, from 2012 to 2014, during which time he was also President of the ECCO Congress 2013 in Amsterdam. In 2007 Dr. van de Velde founded the European Registration of Cancer Care (EURECCA), a quality assurance structure in Europe on colorectal and other cancers. In 2013 he received a Royal Dutch Honor: a Knighthood of the Netherlands Lion. He has coordinated numerous national and international projects, including European randomized breast and colorectal cancer studies. To date he has authored more than 900 publications. He has been Editor-in-Chief of the Dutch Textbook of Oncology for 25 years, was Associate Editor of the EJSO, and is editor of the Oxford Textbook of Oncology.