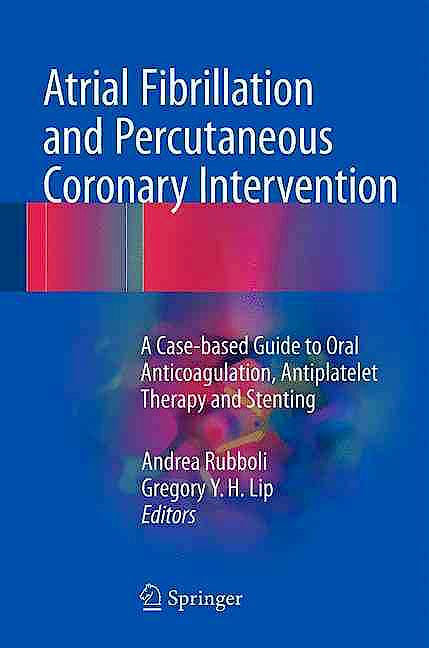 This book considers paradigmatic clinical cases in order to cast light on key issues relating to elective or emergency stent implantation and the use of oral anticoagulation (OAC) in patients with atrial fibrillation. The topics addressed include the optimal periprocedural antithrombotic treatment (uninterrupted vs interrupted OAC, intraprocedural use of heparin and glycoprotein IIb/IIIa inhibitors, etc.), the most appropriate type of stent (bare metal vs drug eluting vs “bioactive”), the optimal regimen (e.g., triple therapy of OAC, aspirin, and clopidogrel vs the combination of OAC and a single antiplatelet agent), and the most suitable duration of the antithrombotic treatment prescribed at discharge (1 vs 6–12 months).

The case-based management recommendations will be of wide practical value in the current health care context, where percutaneous coronary intervention is available even to patients with relevant co-morbidities, such as those warranting long-term OAC, and the indications for OAC are much broader than in the past. The book will appeal especially to clinical and interventional cardiologists, internal medicine specialists, hematologists, and family physicians and will also be of interest to cardiology and internal medicine residents and fellows.

Diagnosis and treatment of thromboembolic diseases, both at the venous and arterial site, have long been his professional interests. Pioneering research has been carried out in the field of the antithrombotic treatment of patients with indication for oral anticoagulation undergoing coronary stent implantation. Over the last years, he has been providing a large amount of data on this issue, and he is currently chairing or co-charing national and international research projects devoted to identify the burden and optimal management of this patient subset. Because of the reputation gained in this field, he participated in the development of consensus scientific statements, and he is being invited to lecture at the most important national and international Congresses. He is a member and fellow of the European Society of Cardiology (ESC), a member of the European Association of Percutaneous Cardiovascular Interventions (EAPCI) and Working Group on Thrombosis of the ESC, and the president-elect of the Italian Atherosclerosis, Thrombosis, and Vascular Biology (ATVB) Group. He has been serving as referee for the most important medical journals.

Gregory Y. H. Lip, MD, is an academic clinical cardiologist based in the Birmingham hospital and leads a large, multidisciplinary research group (including clinical and laboratory-based components). He is also Professor at the University of Aston in Birmingham, England, at Aalborg University, Denmark and at Belgrade University, Serbia. In 2014, he was conferred Honorary Professor at the Chinese PLA General Hospital & Chinese PLA Medical School, Beijing, China.

Half of his time is spent as a clinician, and he practises the full range of cardiovascular medicine, including outpatient clinics, with large atrial fibrillation and hypertension specialist clinics, and coronary care units. He also undertakes coronary intervention. As an academic, Professor Lip provides strategy and research direction for his group. He has had a major interest into the epidemiology of atrial fibrillation (AF), as well as the pathophysiology of thromboembolism in this arrhythmia. Furthermore, he has been researching stroke and bleeding risk factors, and improvements in clinical risk stratification. The CHA2DS2-VASc and HAS-BLED scores for assessing stroke and bleeding risk, respectively – were first proposed and independently validated following his research, and are now incorporated into major international management guidelines. Professor Lip was also selected to the Thomson Reuters Science Watch list of “Who and What was Hot in Scientific Research in 2012” (issued June 2013) which lists the most influential scientific researchers and research papers of the year. In June 2014, he also listed amongst the year’s Thomson Reuters Science Watch list of Hottest Researchers of 2013, and was the only cardiologist on the list.