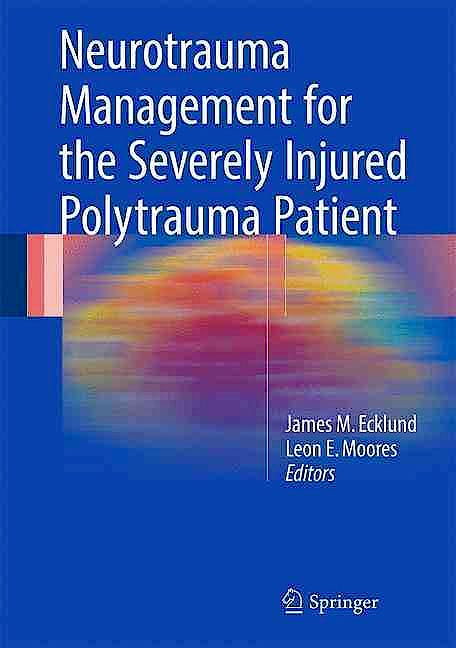 This text addresses many of the questions which occur when medical professionals of various disciplines interact and have different plans and interventions, each with its own valid scientific and/or experience-based rationale:  Questions involving tourniquet placement, ideal fluids and volumes for resuscitation, VTE prophylaxis and many other management considerations. Straightforward decisions in the patient with a single diagnosis often conflict when applied to the neurologically injured polytrauma patients.         Neurotrauma Management for the Severely Injured Polytrauma Patient answers as many of these questions as possible based on the current literature, vast experience with severe neurotrauma in the current conflicts in Afghanistan and Iraq, and the experience of trauma experts across the globe as well as proposes areas for future study where answers are currently less clear.

James M. Ecklund, M.D., F.A.C.S. serves as Chairman of the Inova Neuroscience Institute. Prior to joining Inova Medical Group, he served as Professor and Chairman of the Neurosurgery Program of the National Capital Consortium, which includes Walter Reed Army Medical Center, National Naval Medical Center and the Uniformed Services University. He is a retired colonel in the U.S Army and was deployed as a Neurosurgeon to both Afghanistan and Iraq. His program received the vast majority of American neurotrauma casualties.

Dr. Ecklund’s primary clinical and research interests include complex spine, cerebrovascular disease and neurotrauma with an emphasis on blast and penetrating injury. He directs a neurotrauma laboratory at the Uniformed Services University, has over 100 publications and abstracts, and has lectured throughout the world. He also has served on multiple oversight and advisory boards for the Veterans Administration, Department of Defense, National Institutes of Health, NATO, Neurotrauma Foundation, and Brain Trauma Foundation.

Leon E. Moores, MD, MS, FACS is the CEO of Pediatric Specialists of Virginia and the Associate Chair for Pediatric Programs at the Inova Neuroscience Institute. He retired as a Colonel from the US Army where he led as an Infantry Platoon Leader, Chief of Neurosurgery at Walter Reed, Chairman of the Department of Surgery at Walter Reed, Deputy Commander of the National Naval Medical Center, and Commander of the Fort Meade Medical System. Dr Moores also served two tours of duty in Afghanistan and Iraq. Dr Moores’ clinical and research interests center on brain and spinal tumors in children, CNS infections in combat soldiers, and complex craniofacial reconstruction in severe head and facial trauma. He is a Professor of Surgery and Pediatrics at the Uniformed Services University, and a Professor of Neurosurgery at Virginia Commonwealth University.