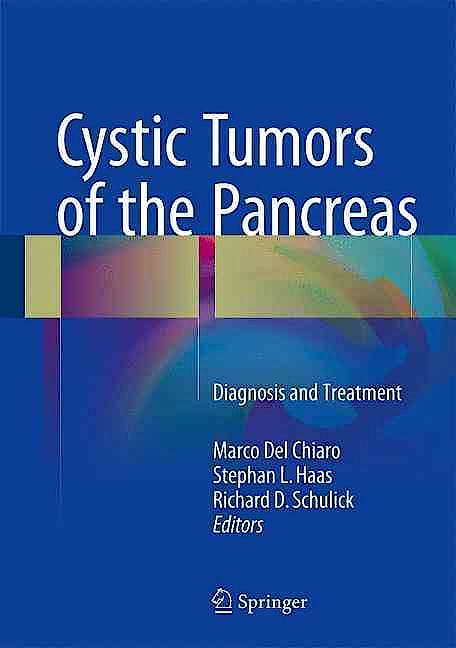 Cystic Tumors of the Pancreas. Diagnosis and Treatment

This book provides a detailed, up-to-date overview of cystic tumors of the pancreas, with coverage of all aspects of diagnosis and treatment (medical, endoscopic, and surgical). After opening chapters on pathology and classification, cytology, molecular biology, and epidemiology, the role of each of the relevant diagnostic methods is carefully examined. The treatment-related chapters describe surgical approaches, including minimally invasive surgery, as well as ablation modalities and chemo-radiotherapy. Thorough guidance is also provided specifically on the management of cystic tumors in high-risk cases and on follow-up. The authors are global opinion leaders in their field who have contributed cutting-edge chapters, with emphasis on clear diagnostic and therapeutic algorithms and with numerous supporting tables and illustrations.

Owing to the widespread use of imaging modalities, clinicians are being confronted by an increasing number of patients with cystic tumors of the pancreas, ranging from benign cysts to metastasized malignancies. The widening spectrum of available diagnostic measures has resulted in controversy over the choice of further means of investigation when cystic changes are encountered, and the growth in therapeutic options has similarly been accompanied by considerable debate over their use. Against this background, Cystic Tumors of the Pancreas will be a valuable source of relevant information for both clinicians and surgeons and will also be of interest to radiologists, pathologists, and basic scientists.

Marco Del Chiaro, MD, PhD, graduated in Medicine and Surgery (Magna cum Laude) from Pisa University, Italy, in 1997. His subsequent training included participation on the course “Pancreatic Cancer: from Genes to Treatment” at The Johns Hopkins University School of Medicine, Baltimore, USA, and his doctorate focused on use of the Da Vinci Robotic System in pancreatic surgery. Since 2010, Dr. Del Chiaro has moved to Sweden where he now is Associate Professor of Surgery and pancreatic surgeon in the Division of Surgery, Department of Clinical Science, Intervention, and Technology (CLINTEC), Karolinska Institutet, Stockholm. Dr. Del Chiaro is Founder and Coordinator of the European Study Group on Cystic Tumors of the Pancreas (United European Gastroenterology) and is Coordinator of the Italian Registry of Familial Pancreatic Cancer. In 2013 he won the American College of Surgeons’ International Guest Scholarship and he has previously received a number of other awards, including repeat prizes from the Italian Association for the Study of the Pancreas. He is lead or co-author of almost 70 original articles in peer-reviewed journals.

Richard D. Schulick, MD, MBA, FACS, is Professor and Aragón/Gonzalez-Gíustí Chair of the Department of Surgery, University of Colorado at Denver, Aurora, CO, USA. Prior to taking up this post he worked at The Johns Hopkins University, Baltimore, where he was Professor of Surgery and Oncology, John L. Cameron Professor of Alimentary Tract Disease, and Chief of the Division of Surgical Oncology. Dr. Schulick specializes in complex cancer surgeries, especially those involving pancreatic cancer. He is the recipient of various awards and has repeatedly appeared in Castle-Connolly America’s Top Doctors. Dr. Schulick is Deputy Editor of Archives of Surgery and Pancreas Section Editor for the Annals of Surgical Oncology. He is also a member of various national committees. Dr. Schulick is the lead or co-author of more than 240 original articles listed in PubMed. He is the co-editor of Diseases of the Pancreas – Current Surgical Therapy (Springer 2007) and Pocket General Surgery (Pocketmedicine.com, 2004).