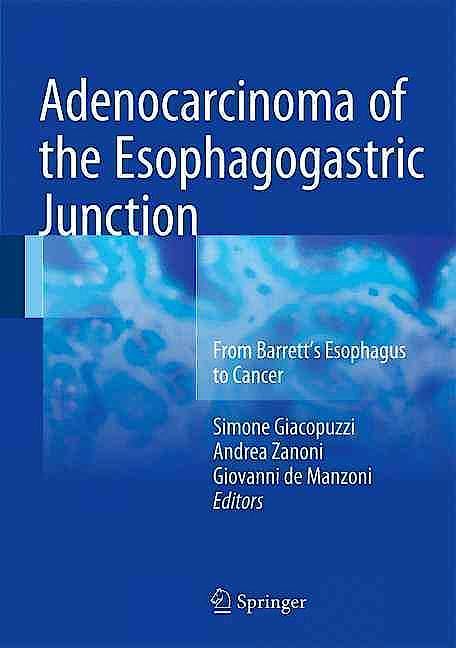 Adenocarcinoma of the Esophagogastric Junction. from Barrett's Esophagus to Cancer

This book offers up-to-date and comprehensive coverage of the diagnosis and therapy of adenocarcinoma of the esophagogastric junction (EGJ). As is appropriate in the era of multidisciplinary and multimodal treatment, the contributions of all the various specialists involved cooperatively in the treatment of EGJ cancer are thoroughly described. Detailed attention is also paid to the significance of preneoplastic lesions, such as Barrett esophagus. The final part of the book represents a surgical atlas documenting the techniques used in the EGJ region, with superb color images and stepwise description of procedures. Against the background of the rapidly increasing incidence in EGJ cancer, especially evident in Western countries, there is a need for greater uniformity in management strategies, which currently vary significantly across the world. This book provides appropriate guidance that will assist all practitioners involved in the diagnosis and treatment of EGJ cancers, including surgeons, oncologists, and radiotherapists.

Simone Giacopuzzi graduated in Medicine from the University of Verona in 2002 and gained a Degree in General Surgery (70/70 and distinction) from the University of Verona in May 2008. During 2009 he spent 6 months as an observer at Fujita Health University, where he completed a training program in laparoscopic upper digestive surgery. Since 2009 he has worked as a General Surgeon in the Department of Upper GI Surgery at Verona Hospital. Since January 2013 he has also attended the PhD course at the Department of Surgery, University of Verona. He has cooperated with the Scientific Committee of the 10th IGCC (International Gastric Cancer Congress) as chairman of the web round table, “Laparoscopy and robotic treatment. What is evidence based?” Dr. Giacopuzzi is author or co-author of 20 indexed journal articles and co-author of a book on esophageal cancer. His research interests include surgical oncology for solid tumors, especially upper GI cancer, and minimally invasive surgery.