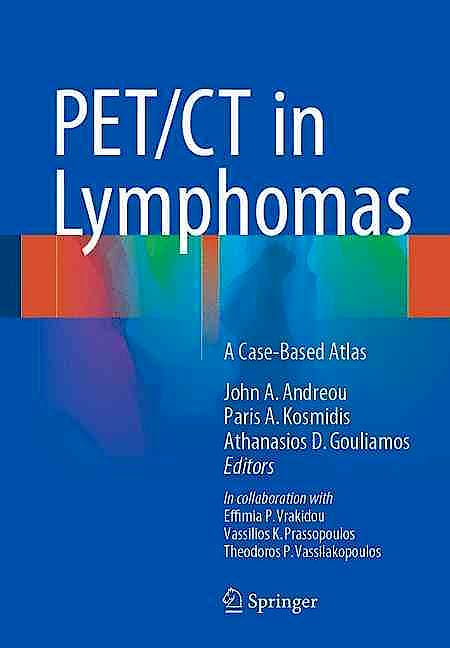 PET/CT in Lymphomas. A Case-Based Atlas

Drawing on an extensive series of cases, this book describes and illustrates in detail the FDG-PET/CT appearances of the most common lymphomas in both adults and children, covering presentations at various anatomic sites. In addition, all other aspects of the current application of FDG-PET/CT in the evaluation and management of patients with malignant lymphomas are described. Full explanations are provided of the potential benefits and limitations of advanced PET/CT techniques and technologies that support novel chemotherapy and radiotherapy approaches in the treatment of lymphoma, and particular attention is paid to the major challenge of incorporating progress in quantitative imaging technology into radiotherapy treatment planning, guidance, and monitoring. This clinical case-based atlas will be an invaluable tool for radiologists, hematologists, and clinical oncologists.

He also serves as co-director of the 12th and 13th Cycle of ESNR-ECNR Pierre Lasjaunias Courses in Neuroradiology, Diagnostic and Interventional (2013-2016).

His research interest is primarily in the fields of Neuroradiology (Stroke), Advanced MRI Techniques in Medicine and Biomaterials and Radiology Information & Forecasting Integrated Systems.
He has authored 154 Pubmed-cited publications. He is also author and co-author in books for medical students, published in Greece. He is co-editor of the book: “Imaging in Clinical Oncology” (Springer, 2013). He served as reviewer in European Radiology. He has been awarded from Athens Academy as co-author of the book Introduction in Medical Imaging (1992).

Theodoros P. Vassilakopoulos is an Assistant Professor in the Department of Haematology and Bone Marrow Transplantation of the National and Kapodistrian University of Athens (Laikon General Hospital, Athens, Greece). He was born in Athens in 1968 and graduated from Athens Medical School with marks “Excellent”. He was trained in Internal Medicine and Haematology in the 1st Dept. of Internal Medicine, University of Athens (1999-2005) and became a member of the faculty of University of Athens in 2007. He is the Vice Chairman of the Lymphoma Section of the Hellenic Society of Hematology. His research in the area of hematologic malignancies is mainly focused on Hodgkin lymphoma, aggressive lymphomas and lymphadenopathies. Prof. Vassilakopoulos is the Associate Editor of “HAEMA”, the official journal of the Hellenic Society of Haematology and has served as a reviewer in >25 international journals. He has authored 107 Pubmed-cited publications with total impact factor of 410, h-index 22 and >2500 citations.

Dr. Vassilios Prassopoulos is Director of Nuclear Medicine - PET/CT Department of HYGEIA – MITERA Hospital since 2006. He graduated from Athens Medical School (1987), was trained in Internal Medicine (1990-1991) in Polyclinic- Athens and in Nuclear Medicine (1991- 1994)in Alexandra University Hospital – Athens. From 1996 until 2006 he was the Dir. of Nuclear Med Dep in IASO General Hospital. Dr. Prassopoulos is a member of the Editorial Board of the European Journal of Nuclear Medicine and Molecular Imaging since 2004 and member of the Ethics Committee of EANM. He has served as the Greek National Delegate in EANM (2008-2015) and serves as Deputy National Delegate since 2015. Under his supervision, the Nuclear Medicine and PET/CT Dep of HYGEIA Hospital, has active participation in 2 multicenter trials. His research has mainly focused on nuclear Cardiology and PET/CT oncology/lymphomas. He has authored 25 studies in world-wide medical journals, 23 in Greek and participated as an author in “Imaging in Clinical Oncology”. As an invited lecturer and as Chairman he has participated in several National and European Congresses.

Paris A. Kosmidis, MD, is Head of the second Medical Oncology Department at "HYGEIA" Hospital in Athens , Greece and former ESMO President. He received appointments to serve as Head of the Second Department of Medical Oncology at St.Anargiri Cancer Hospital in Athens (1981 - 1985) and at "METAXA" Cancer Hospital in Piraeus (1985 - 1997). He has published more than one hundred papers and completed 5 books. He serves at the Editorial Board in many oncology journals of the world. Dr. Kosmidis has been awarded by the Academy of Athens twiceand he is honorary member of ESMO.

Effimia P. Vrakidou was born in Athens and graduated from Athens Medical School. She was trained in Internal Medicine and Hematology in Athens. Since 1991 she is member of Hygeia Hospital in Hematology Clinic and in Bone Marrow Transplant Unit. Her research interest is in hematologic malignancies and on Infections Diseases in Neutropenic patients. She is member of Lymphoma and Acute Leukemia group of Hellenic Society of Hematology. Since September 2012 she has certified as principal investigator to Clinical trials.