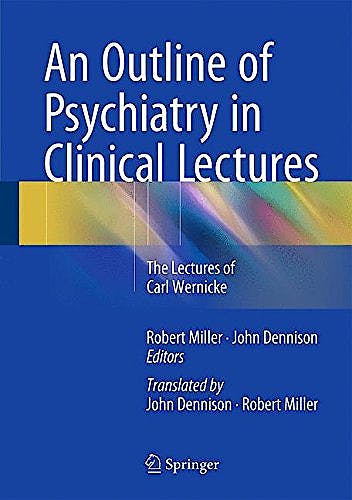 An Outline of Psychiatry in Clinical Lectures. the Lectures of Carl Wernicke

This work is a collection of Carl Wenicke’s lectures on neuropsychiatry translated into English for the first time. Beginning with basic concepts about normal brain function, the book moves to clinical topics, dealing first with chronic mental disorders and 'paranoid states', and then to the more complex area of acute mental disorders. Many of the featured topics are still clinically relevant, and matters of contemporary debate. Carl Wernicke is one of the pioneers of neurology and psychiatry; clinicians, researchers and historians will find this of great interest.

Introduction to this Translation

Nature of memory images. Retinal after-images and remembered visual images. The hypothesis of special sense cells and memory cells is insufficient as an explanation. Local signs in the retina. Visual representations.

The concrete concept of an ‘association of memory images’. Awareness of the outside world. Number of concepts. Requirement of causality.

The body is a part of the outside world. Awareness of physicality is a function of the central projection fields. Organ sensation and sensory content of sensations. Feeling tone of sensations. The large intestine represented in bodily-awareness.

Consciousness of personhood, or individuality. Is its localization accessible? The mystery of self-awareness.

Sensory deception of speech sounds or phonemes. Delusions of relatedness and reference: of

When has a mental illness ended?

Definition of acute, as opposed to chronic, psychoses. Presentation of an almost-recovered case of acute psychosis. Features and special coloration of ideas of explanatory delusions. A few new sources of delusional elaboration: by analogy; by failure of attention; and by aberrant restructuring of associations.

Acute hallucinosis. Presentation of a typical case during the healing process. Aetiology. Danger of relapse.

A case of acute autopsychosis based on hysteria. Description of autopsychic disarray. Examples of alternating consciousness, the ‘second state’ of French authors. Episodic drinker. Cure of one such by bromide treatment. Acquired moral insanity, a special form of autopsychosis. Example of one such case of recurrent behaviour.

Presentation of two opposite types of illness. Digression on volition. Clinical picture of Affective melancholia. Risk of suicide due to this. Fantastic delusions of belittlement. Phonemes and visions. Course, frequency of the illness. Diagnosis. Treatment. Prognosis.

Confused mania or agitated confusion. Escalation of intrapsychic hyperfunction to confusion. Different grades of flight of ideas. Admixture of sensory and motor excitatory symptoms. Clinical picture. Meynert’s Amentia. Asthenic confusion as a phase of confused mania and as a stand-alone illness.

Dissimulation and simulation of mental disturbance. Functions of institutional treatment. Final remarks on the prospect of a pathological-anatomical rationale of the psychoses.