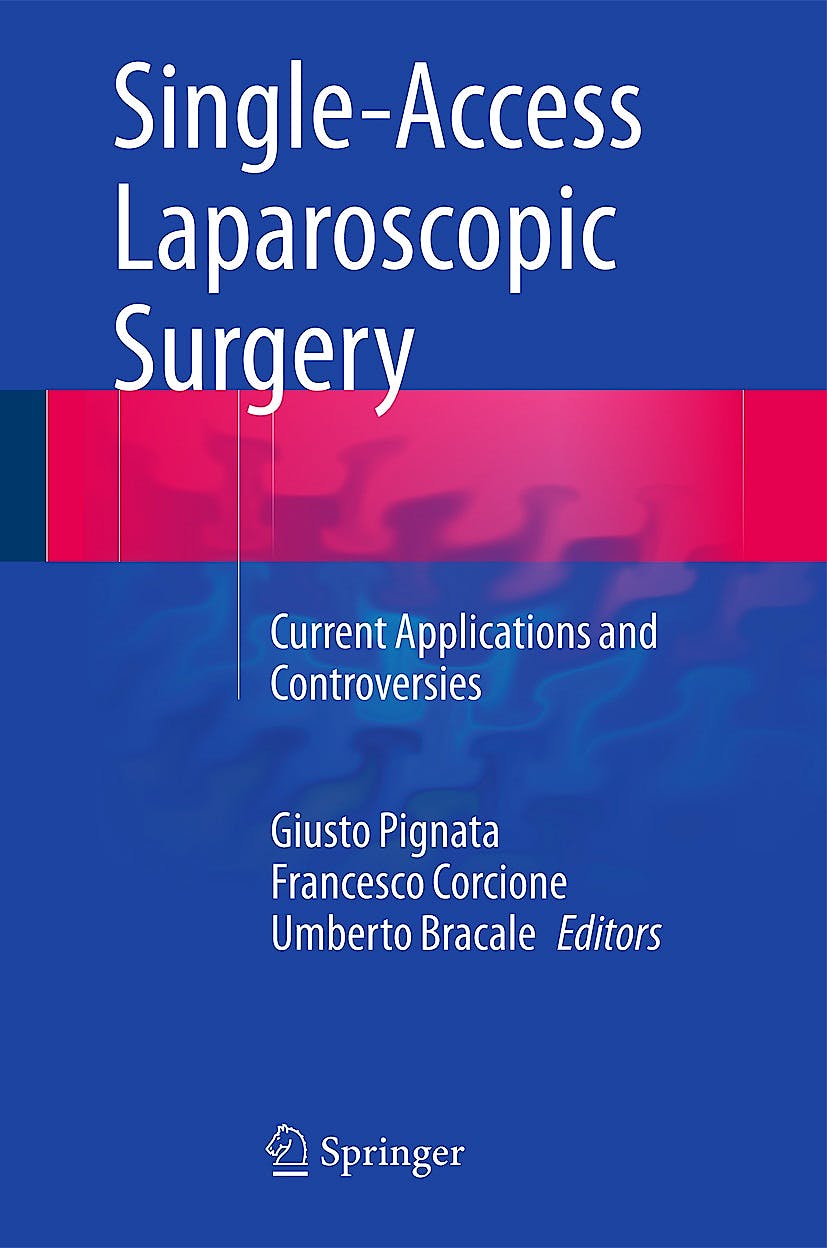 Single-access laparoscopic surgery (SALS), performed using a single transumbilical access, has recently proved to bring advantages over other forms of laparoscopic surgery due to the reduction in the number of incisions and the consequent decrease in morbidity, less blood loss and postoperative pain. Furthermore, cosmesis may be improved because incision within the umbilicus renders surgery virtually scarless. Nevertheless, as with all new surgical concepts, questions may be raised regarding safety, usefulness, and appropriateness. This book analyzes the use of SALS for different indications and abdominal surgical procedures based on a careful literature review of the experience of the most important surgical teams employing this approach and also the authors’ personal observations. The coverage is broad, encompassing, for example, the role of SALS in appendectomy, repair of abdominal wall defects, cholecystectomy, gastric surgery, nephrectomy, splenectomy, hemicolectomy, and pancreatic, liver, and gynecological surgery. Resident surgeons specializing in laparoscopy, researchers, and related healthcare professionals will find Single-Access Laparoscopic Surgery to be an invaluable source of information in an area which deserves to receive detailed attention.

Giusto Pignata - After graduating in Medicine and Surgery (1983), he got two specialty degrees, Urology (1987) and General Surgery (1992). Postgraduate fellowships: at the St. Mark's Hospital (London), at the Cleveland Clinic Foundation, at the University Hospital of Ninewells (Scotland) and at Hopital P. Brousse (Paris). He was worked in Regional General Hospital of Treviso and he has taken part to several surgical activities in the fields of general surgery, in particular surgical oncology, thoracic surgery and transplantation. He became Head of Surgery in 1999 at Monfalcone Hospital and since 2007 he is Head of General and Minimally Invasive Surgery of "San Camillo" Hospital of Trento. He performs around 3,500 procedures as first operator under general anesthesia and under local anesthesia. He is from 2011 Visiting Professor of Surgery in Medical School of Belgrade and consultant in General Hospital of Nuoro in mini-invasive and robotic surgery. He perfumed more than 300 single site operations regarding gastric, colo-rectal, kidney, pancreas and liver disease. The activity in minimally invasive surgery was continued and coupled with the creation of a Multidisciplinary surgical team in oncological/inflammatory diseases of the female reproductive apparatus. He is active member of a number of scientific and medical societies and author of 100 publications on international journals.

Francesco Corcione - After his graduation from medical surgery school he specialized in General Surgery in 1981 and in Endocrine Surgery in 1984. His clinical activity covers 40 years, from resident to Head of the General Surgery Division at the highly specialized Hospital V. Monaldi in Naples (Italy), where he has performed 2000 surgical interventions as first surgeon in the last 3 years and 160 robotic surgeries. In 2007 he performed the first italian and second worldwide transvaginal cholecystectomy. He is full teacher in Postgraduate General Surgery and Cardiac surgery School Federico II in Naples. His teaching took him to the EITS/IRCAD in Strasburg (J. Marescaux) to Hamburg at the EICS, the ACOI School of Surgery (G.L. Melotti). Prof. Corcione is also head of the postgraduate laparoscopic surgery school of the Italian Surgical Society. Postgraduate schooling: after the Clinique Chirurgicale in Reims, he went to Padova, to Amiens, Dijon, Brussels. He was awarded the Sebetia-ter Award for surgery and the Da Vinci Award in science and technology. He is active member of a number of scientific and medical societies and author of 225 publications on international journals and Springer books author (New Procedures in Open Hernia Surgery, Minimally Invasive Surgery of Liver). He's actually the elected President of Italian Surgical Society (SIC) and the past President of Italian Endo-Laparoscopic Surgery (SICE).

Umberto Bracale - After graduating in Medicine and Surgery in 2001 he became specialist in General Surgery. He is currently a teaching fellow at Naples University Dept. of General, Thoracic and Vascular Surgery after a clinical fellowship in General and Mininvasive Surgery (Dir.: G. Pignata) at the “San Camillo” Hospital of Trento. He worked as Honorary Contract Staff at Maidstone Hospital. (Dir.: Amir Nisar) in Kent, UK, and later earned his PhD in Surgical Science and Advanced Diagnostic Therapeutic Techniques in 2011. He volunteered as Surgeon in Western Africa in 2005, 2006, 2007, 2011 and 2012 and followed many post graduate courses in Italy, Germany and Scotland. Member of the most important Italian surgical societies and speaker at various National and International Congresses on laparoscopic and minimally invasive surgery.