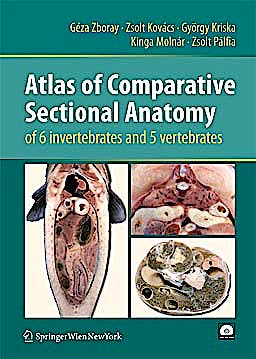 Atlas of Comparative Sectional Anatomy of 6 Invertebrates and 5 Vertebrates

Images show photographs taken from original preparations and 3D photos on the enclosed CD. Studying the macrosections with unaided eyes, with a simple magnifier or binocular microscope might be of great help to accomplish traditional anatomical studies and to establish a certain spatial experience/space perception.

Introduction
Structure of the atlas
Material and methods
Anatomical abbreviations

Dr. Géza I Zboray, graduated as a grammar/high-school teacher of biology and geography at the Eötvös Loránd University, Faculty of Science, Budapest, 1964. Dr. Univ.: summa cum laude, 1973. He is a senior lecturer at Department of Anatomy, Cell and Developmental Biology, Eötvös Loránd University, Faculty of Science. His main interest is neuroanatomy. BSc lecture: comparative anatomy, histology and embryology. MSc lectures and practical courses: neuroanatomy, developmental biology and comparative and human histology. PhD course: Comparative neuroanatomy (1993-2002). He is the editor and author of most textbooks, published by the department (more than 10 volumes), included the above mentioned atlas (in English: Atlas of comparative sectional anatomy. Honors and awards: For the excellent work, given by the Cabinet Council of Hungary (1986), For the Hungarian Science (2002), Pro Universitate medal, given by the University Council, Eötvös Loránd University (2002), Silver Cross Medal of the Hungarian Republic, given by the President of Hungary (2002). He was elected as an Excellent lecturer of he Faculty of Science, Eötvös Loránd University (1984, 1990, 1997 and 2002).

Dr. Zsolt Kovács, PhD (neurobiology, 2003; habilitation: 2008) is associate professor of University of West Hungary (Savaria Campus, Faculty of Sciences, Department of Zoology, Szombathely). He founded a neurophysiological laboratory in his university (2001). His special field in research: absence epilepsy genesis in WAG/Rij rats; connections between neuroinflammatory reactions and absence epilepsy genesis; uneven regional distribution of nucleosides in the human brain (www.neurozsk.hu). He is the lecturer of comparative anatomy and physiology as well neurochemistry. Zsolt Kovács is author of two textbooks of histology, and co-author of the "Összehasonlító metszetanatómiai atlasz", in English: Atlas of comparative sectional anatomy).

Dr. Kinga Molnár graduated as a biologist (1993), obtained her PhD title in cell biology (2001) at Eötvös University. She has more than 15 years routine in higher education. Her present affiliation is a lecturer in comparative anatomy, comparative and mammalian histology, developmental and human embryology and zoology at the Department of Anatomy, Cell and Developmental Biology, Faculty of Science, Eötvös Loránd University.
She is the illustrator of 8 textbooks written on a field of anatomy, histology, surgery and neurochemistry by authors working at the Eötvös University and the Semmelweis University of Medicine (1996-2005, publishers: Nemzeti Tankönyvkiadó (National Textbook Publishing Company), Eötvös Kiadó (Eötvös University Press), Semmelweis Kiadó (Semmelweis Publishing Company), Dialóg Campus and Scolar Publishing Companies). She is the author of an anatomy book (Scolar Kiadó, 2005) and one of the co-authors of the Atlas of comparative sectional anatomy (Nemzeti Tankönyvkiadó, 2005).