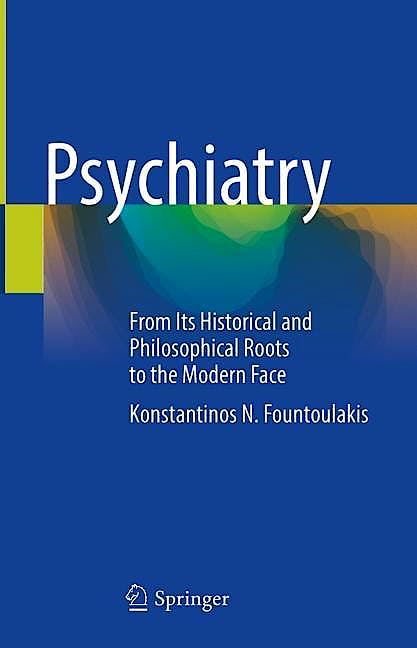 Psychiatry. From Its Historical and Philosophical Roots to the Modern Face

Guide to read this book.- The origins of Psychiatry.-

Part B: The Philosophical and scientific roots.- Introductory remarks to the philosophical roots.- The concept and definition of mental illness.- Mental health.- Disability in mental disorders.- The mind-brain problem and the issue of Free Will.

This book was the end product of life experiences, thoughts and intellectual wanderings of the author, who through his career and for the last twenty years was always serving all the three aspects of a Psychiatrist: He is a clinician, a researcher and an academic teacher. The book includes a comprehensive history of Psychiatry since antiquity and until today, with an emphasis not only on main events but also specifically and with much detail and explanations, on the chain of events that led to a particular development. At the center of this work is the question ‘What is mental illness?’ and ‘Does free will exist?’. These are questions which tantalize Psychiatrists, neuroscientists, psychologists, philosophers, patients and their families and the sensitive and educated lay persons alike. Thus, the book includes a comprehensive review and systematic elaboration on the definition and the concept of mental illness, a detailed discussion on the issue of free will as well as the state of the art of contemporary Psychiatry and the socio-political currents it has provoked.

Finally the book includes a description of the academic, social and professional status of Psychiatry and Psychiatrists and a view of future needs and possible developments.

A last moment addition was the chapter on conspiracy theories, as a consequence of the experience with the social media and the public response to the COVID-19 outbreak which coincided with the final stage of the preparation of the book. Their study is an excellent opportunity to dig deep into the relation among human psychology, mental health, the society and politics and to swim in intellectually dangerous waters.

Konstantinos N. Fountoulakis, MD, is Professor of Psychiatry at Aristotle University of Thessaloniki, AHEPA University Hospital, in Thessaloniki, Greece. He served as a medical officer in the Greek Armed forces and retired with the rank of major, and was a Research Fellow in the Department of Psychiatry, Division of Neuropsychiatry, at the University of Geneva in Switzerland. Dr. Fountoulakis’ areas of clinical and research interest are reflected in the topics that he teaches: general psychiatry, biological psychiatry, psychopharmacology, mood disorders, schizophrenia and personality disorders. He is an active member of a number of national and international professional organizations, peer referee for the Cochrane Collaboration and especially active with the International College of Neuro-Psychopharmacology (CINP). In 2009, he was appointed member and in 2012-4 chair of the Greek Ministry of Health Committee for the Administrative, Economic and Scientific Supervision of the Mental Health Units of the deinstitutionalization project. In 2013, he was appointed chair of the Independent Committee of Experts for the Assessment of Mental Health Services of the Greek Ministry of Health. He chairs the ISNP and since 2006, he has served in the board of a number of Sections of the World Health Organization (WPA) to which is a honorary member since 2014. Dr. Fountoulakis is Editor in Chief of Annals of General Psychiatry and served as Section Editor of Current Opinion in Psychiatry. He has coauthored more than 350 papers delivered to congresses and more than 250 of them are published in international journals such as the LANCET, BMJ, Am J Psychiatry, British Journal of Psychiatry, Biological Psychiatry, International Journal of Neuropsychopharmacology, Journal of Affective Disorders, Schizophrenia Research, Psychiatry Research, Bipolar Disorders, and the Annals of General Psychiatry among others, with over 10,000 citations and h=49 (Google Scholar). He authored or co-authored a number of chapters in books including the Mood disorders chapter for the Wiki project of the World Psychiatric Association (WPA). He has authored the book Bipolar Disorders: An Evidence-Based Guide to Manic Depression (Springer-Verlag, 2015) and co-edited the ‘Advances in Psychiatry vol III’ (Springer 2018). He has received a number of national and international research awards, including the 2012 Kraepelin-Alzheimer medal of the University of Munich and the 2015 Excellence in Education Award of the WFSBP.