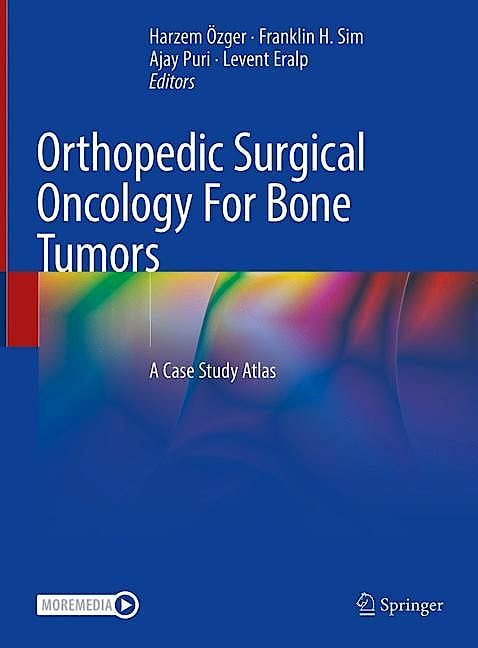 This atlas presents a collection of richly illustrated teaching cases. It covers the fundamentals of orthopedic oncology complemented with relevant aspects that are demonstrated using individual cases. In a specialty that deals with a relatively smaller number of cases compared to tumors of other systems, this atlas prepares readers for clinical practice by combining a problem-based learning (PBL) approach, which lies on the continuum between structured and guided learning, with theory and practical insights.

The book is divided into sections, arranged according to anatomical regions and the reconstruction type. Each section focuses on a specific anatomical region, and each case presentation includes the basic clinical history, basic principles, preoperative, perioperative and radiographic images, a pitfall list, treatment strategy, technical pearls, outcomes and complications. For each region the authors discuss both the biological and non-biological reconstruction techniques.

The book is designed to actively involve the reader, making it an invaluable tool for all orthopedic surgeons confronted with oncologic surgery. The book is intended for trainees in orthopedics, orthopedic oncology fellows as well as practicing consultants.

Dr. Harzem Özger graduated from the medical school at Istanbul University Istanbul Faculty of Medicine in 1979. He completed his residency training in the Dept. of Orthopaedics and Traumatology of the same institution in 1984 with his thesis on “Resurfacing Arthroplasty in Hip Surgery”, which was based on his studies in Istanbul, Berlin and Heidelberg. In 1989, he gained experience in tumor surgery at the Medical University of Vienna’s Dept. of Orthopaedics, under the supervision of Prof. Rainer Kotz. Upon his return to Istanbul, he established the "Bone and Soft Tissue Tumors" registry at his home clinic. After becoming an Associate Professor in 1990, he worked almost exclusively in the field of orthopedic oncology and received a full professorship in 1996. His clinical practice and research focus on biological reconstruction using vascular fibula and liquid nitrogen recycled autografts, nonbiological reconstruction with tumor prosthesis, spinopelvic tumor surgery, extreme limb salvage in massive or recurrent tumors utilizing radiotherapy, complex foot reconstruction after tumor resection, limb lengthening and deformity correction and wound management in orthopedic oncology. Since his retirement from Istanbul University in 2016, he has continued his private practice and academic work as the head of Istanbul Orthopedic Oncology Group. He is a member of the Turkish Musculoskeletal Tumour Society (TMTS), International Society of Limb Salvage (ISOLS), European Musculoskeletal Oncology Society (EMSOS), Asia Pacific Musculoskeletal Tumour Society, Musculoskeletal Tumor Society (MSTS) and International Skeletal Society (ISS).

Dr. Franklin H. Sim graduated from Dalhousie University Medical School in 1964. He completed his orthopedic residency training at Mayo Clinic and was inspired by Dr. Jack Ivins in the area of musculoskeletal oncology.  Dr. Sim became a leading innovator and proponent of limb sparing surgery in patients with bone and soft tissue tumors in the 1970s. He was a founding member of the Musculoskeletal Tumor Society and has been active in the International Society of Limb Salvage (ISOLS) and the International Skeletal Society (ISS). Doctor Sim has been a member of the Mayo Clinic faculty for the past 47 years, and he has trained hundreds of residents and more than 50 orthopedic oncology fellows from the United States and overseas.

Dr. Ajay Puri is currently Professor and Head of Surgical Oncology, Chief of Orthopaedic, Oncology and Head of the Tissue Bank at Tata Memorial Centre, Mumbai, India. He served as President of the Asia Pacific Musculoskeletal Tumor Society, Founder President of the Indian Musculoskeletal Oncology Society and as past Chairman of the Indian Orthopaedic Association (Oncology). He is also Professor (courtesy faculty) of Materials Science and Engineering at the Department of Materials Science & Engineering, College of Engineering, University of North Texas, USA. He is actively involved in clinical, biomedical and basic research and is the principal investigator in many studies. He is a member of the Global Steering Committee of the International Sarcoma Kindred Study (ISKS), the largest multi institutional international trial aimed at understanding the genetic background of sarcomas. He has developed a low cost indigenous megaprosthesis for limb salvage after oncologic reconstruction that is now extensively used in the country and other Asian and African nations and has also pioneered and popularised novel methods of biological reconstruction after oncologic resection. He serves on the editorial board of Bone & Joint Journal (formerly JBJS.Br.), Bone & Joint-360, Bone & Joint – Open, Sarcoma and Frontiers in Orthopedic Surgery and has published more than a hundred and fifty papers as well as numerous book chapters.

Dr. Levent Eralp attended medical school at Istanbul University Istanbul Faculty of Medicine and graduated in 1991. He completed his residency training in the Dept. of Orthopaedics and Traumatology of the same institution in 1995. He visited Staatskrankenhaus Holzminden, Germany for joint replacement training in 1997, University Hospital Kanazawa, Japan in 2003 orthopedic oncology and external fixation training with SICOT scholarship, Munich, Germany also in 2003 for lengthening with Fitbone training and Resurgens Orthopedics, Atlanta, USA for musculoskeletal infection training in 2004. Dr Eralp gained associate professorship in 2003 and full professorship in 2009 from his home institution. He also holds a master of science degree from University of Istanbul, Institute of Oncology, Epidemiology and Biostatistics since 2001. His professional areas of interest include orthopedic oncology, musculoskeletal infections, external fixation, adult reconstruction, total joint replacement, trauma surgery and complex pediatric reconstructions. He has contributed to numerous internationally published books on limb reconstruction as editor and chapter author. He has authored approximately 150 scientific papers and participated in the organization of numerous courses and conferences both at national and international level.  He holds memberships in International Society of Orthopaedic Surgery and Traumatology (SICOT), International Society of Limb Salvage (ISOLS), Limb Lengthening and Reconstruction Society (LLRS – USA) and American Academy of Orthopedic Surgeons (AAOS). Dr Eralp continues his clinical practice in his private clinic as well as in VKV American Hospital, Istanbul.