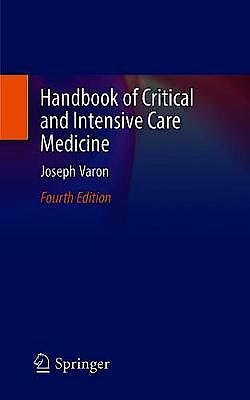 The latest edition of this handbook is a concise yet comprehensive guide for attending physicians, fellows, residents, and students who cover the ICU. The chapters follow an outline format and are divided by organ system, including neurologic disorders and cardiovascular disorders, and special topics, such as environmental disorders, trauma, and toxicology. The handbook includes thoroughly updated chapters from the previous edition, alongside completely new content.

Written by an authority in the field, the Handbook of Critical and Intensive Care Medicine, Fourth Edition is a valuable one-stop reference for every practitioner engaged in Critical Care Medicine across the world.

Dr. Varon is the Chairman of the Board of United Memorial Medical Center and United General Hospital. He is Chief of Staff and Chief of Critical Care at United Memorial Medical Center and United General Hospital in Houston. In addition, he is the Chief of Staff at UMMC North and UMMC Sugarland Hospitals. Dr. Varon is the Former Chief of Critical Care Services and Past Chief of Staff at University General Hospital. He is a Professor of Medicine, Surgery and Professor of Emergency Medicine at several universities in Mexico, the Middle East and Europe. After completing medical training at the UNAM Medical School in Mexico City, Mexico, Dr. Varon served as internship in internal medicine at Providence Hospital/George Washington University, Washington, D.C. A subsequent residency in internal medicine was completed at Stanford University School of Medicine in Stanford, California. Dr. Varon also served fellowships in critical care medicine and pulmonary diseases at Baylor College of Medicine in Houston. An avid researcher, Dr, Varon has contributed more than 830 peer-reviewed journal articles, 10 full textbooks, and 15 dozen book chapters to the medical literature. He is also a reviewer for multiple journals and currently serves as Editor-in-Chief for Critical Care and Shock and Current Respiratory Medicine Reviews. Dr. Varon has won many prestigious awards and is considered among one of the top physicians in the United States. Dr. Varon is also known for his groundbreaking contributions to Critical Care Medicine in the fields of cardiopulmonary resuscitation and therapeutic hypothermia. He has developed and studied technology for selective brain cooling. He is also a well-known expert in the area of hypertensive crises management. With Dr. Carlos Ayus, he co-described the hyponatremia associated to extreme exercise syndrome also known as the "Varon-Ayus syndrome" and with Mr. James Boston co-described the healthcare provider anxiety syndrome also known as the "Boston-Varon syndrome". Dr. Varon has lectured in over 58 different countries around the globe. Along with Professor Luc Montagnier (Nobel Prize Winner for Medicine in 2008), Dr. Varon created the Medical Prevention and Research Institute in Houston, Texas, where they conduct work on basic sciences projects. Dr. Varon has appeared in National and International television and radio shows with his techniques and care of patients. Dr. Varon is well known for his academic and clinical work in the management of acute hypertension and has published extensively on this subject. In addition, Dr. Varon has worked on studies related to ethical issues in acute care medicine and has several peer-reviewed publications on this controversial subject. In the past 11 months Dr. Varon has become a world leader for his work on COVID19 and his co-development of the MATH+ protocol to care for these patients. For this he has won multiple awards, including a proclamation by the Mayor of the City of Houston of the "Dr. Joseph Varon Day".