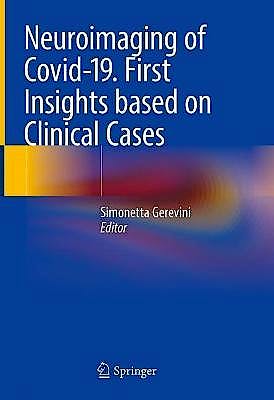 Neuroimaging of Covid-19. First Insights based on Clinical Cases

This book presents the variability of the effects of Covid-19 on the nervous system (NS), with the purpose to update content and images based on improved scientific evidence.

Current available data show that involvement of the NS is frequent in patients with SARS-CoV-2 infection. The most common neurologic syndromes include cerebrovascular disorders, encephalopathies, inflammatory Central Nervous System (CNS) syndromes, peripheral neurologic disorders, psychiatric disorders. The pathophysiology of neurological manifestations is far from being understood. They can be coincidental, common complications of severe viral infection, or direct consequence of the viral infection either via indirect para-infective mechanisms or direct viral penetration of NS. Experimental animal models had previously demonstrated the neuroinvasive potential of SARS-CoV and the detection of viral particles in special structures such as the thalamus, nucleus ambiguous and nucleus of the solitary tract, suggesting that CNS invasion can contribute significantly to the severe outcome not only through direct damage to neurological structures, but also through a potential detrimental effect on cardiorespiratory responses. Up to now, the detection of SARS-CoV-2 RNA in the cerebrospinal fluid of COVID-19 patients has been reported occasionally and conclusive pathological demonstration of the virus in the CNS is lacking.

Simonetta Gerevini became Doctor in Medicine and Surgery in 1994 and Specialist in Clinical Radiology with subspecialty in Neuroradiology in 1999. Since 1995 she has been working at the Neuroradiology Department of I.R.C.C.S. San Raffaele Hospital, Milan (Italy). In 2013 she obtained the European Diploma in Head and Neck Radiology and since 2017 she has the National Scientific Qualification as associate professor of (Neuro) Radiology in Italian Universities. During these years she focused her research interests between CNS infectious inflammatory and demyelinated diseases and neuromuscular diseases. Her main focus has been PML, Multiple Sclerosis (MS) and vasculitis using 1.5 and 3T MR equipment with standard and advanced techniques and Neuromuscular imaging in peripheral nervous system (brachial and lumbar plexus, nerves) on 1.5 T and 3 T MR and inherited muscle diseases. From 2012 to 2019 she was director of the Advanced Neuro-oncologic Functional Unit in the Neuroradiology Department of I.R.C.C.S. San Raffaele Hospital and in August 2019 she became Director of the Neuroradiology Department at the Hospital of Bergamo (Italy).