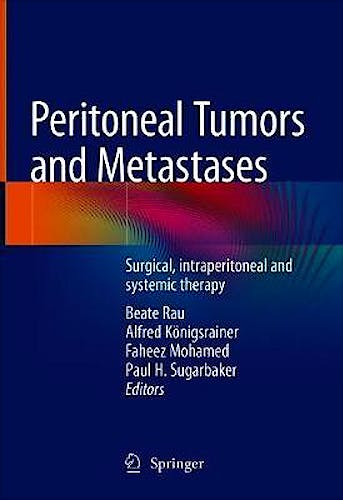 This book provides surgeons and oncologists with a well-founded and detailed overview of the available treatment options for peritoneal malignancy and differential selection of the appropriate forms of therapy. Systemic chemotherapy options are also considered, as are surgical cytoreduction (CRS) and all forms of intraperitoneal chemotherapy (IPC) especially hyperthermic IPC (HIPEC), and immunotherapy, including specific procedures such as PIPAC.

Subsequent chapters address perioperative care, complications and recurrences, as well as psycho-oncological, palliative medical and nursing care. The process of parietal and visceral peritonectomy in the large and small intestine is additionally illustrated by three video clips accessible online. Covering a broad range of aspects, including peritoneal metastasis and intraperitoneal chemotherapy, the book offers a valuable tool for surgeons, oncologists and anesthesiologists alike.

Beate Rau is graduated in Medicine and Surgery at the University of Muenster in 1984 and is since 2016 Professor of Surgery at the CHARITE Medical University in Berlin. She has specialized in surgical oncology, especially in upper and lower GI-tract- and thoracic-cancer-surgery. Her main interest is surgical oncology, what she mostly did the last 28 years. Beate Rau started her academic carrier in Heidelberg Rohrbach, University of Heidelberg and at the Charite in Berlin. She is very much involved in education of the students and young trainees.

Since 2015 she is the head of the Section Special Surgical Oncology at the Charite. Her major interest is hyperthermia which has been central to her career in the field of surgical oncology and research. Convinced by hyperthermia she achieved experience in cytoreductive surgery (CRS) for peritoneal surface malignancies (PSM) and HIPEC over the last 22 years. With her effort, she build up a centre of reference for surgical treatment of PSM in Germany, announced by the German society of general surgery (DGAV) and is therefore responsible for one of the three centres of reference in Germany. She is co-author of several papers (www.scopus.com, www.pubmed.com) with an H-index of 26 (July 2020), wrote one book about peritoneal metastasis and several book-chapters and contributed to many abstracts presented at international and national meetings. She published more than 150 articles.

Alfred Koenigsrainer completed his medical training at the University of Innsbruck, Austria and has been Chair and Director of the Department of General, Visceral and Transplant Surgery at the University Hospital and Medical Faculty, University of Tubingen, Germany since 2004. After fellowships in Belgium, Germany, Italy and England he was appointed as consultant and vice chairman of the Department of Surgery and Transplantation, University Hospital Innsbruck. He is Chair of the German working group for surgical endoscopy (CAES), past chair of the German Association for the Study of the Liver, past chair of the Austrian society of transplantation, past board member of the European Liver and Intestine Transplantation Association (ELITA), and a Fellow of the American College of Surgery (FACS). With more than 500 publications in scientific journals to his credit, his main focus is on surgical oncology, especially HBP surgery and cytoreductive surgery, HIPEC, PIPAC, and organ transplantation.

Faheez Mohamed graduated from the University of Edinburgh and underwent surgical training in the North East of England with a period of research at the Washington Cancer Institute, USA under the supervision of Dr Paul Sugarbaker. He was appointed Consultant Surgeon at the Peritoneal Malignancy Institute, Basingstoke in 2009 with an interest in cytoreductive surgery and Hyperthermic Intraperitoneal Chemotherapy (HIPEC) for the treatment of peritoneal malignancy. He is currently Clinical Director of the Department of General Surgery at Hampshire Hospitals Foundation Trust and is the Clinical Lead for the UK Colorectal Peritoneal Malignancy Clinical Database. He is actively involved in clinical and basic science research in the field of peritoneal malignancy.

Paul Sugarbaker is a graduate of Cornell University Medical College in New York City. His surgical training was at the Peter Bent Brigham Hospital in Boston, Massachusetts. Immediately following his residency training he completed a Masters Degree in Tumor Immunology from Harvard University. From Boston he went to Bethesda, Maryland and spent a decade at the Surgery Branch, National Cancer Institute, National Institutes of Health (NIH). His focus at the NIH was sarcoma surgery, colorectal and liver metastases, and peritoneal metastases. After a brief 3 year stay at the Emory Clinic in Atlanta, Georgia, he returned to Washington, DC to establish the Program in Peritoneal Surface Malignancy at the Washington Cancer Institute. For 31 years he has been involved in pharmacologic and clinical research in patients with peritoneal metastases. His efforts and the efforts of the fellows in the program have resulted in over a thousand published manuscripts. Currently, he is involved in surgical problem solving in an effort to optimize the management of peritoneal metastases from both gynecologic and gastrointestinal malignancy. He is currently the Secretary General for the Peritoneal Surface Oncology Group International (PSOGI).