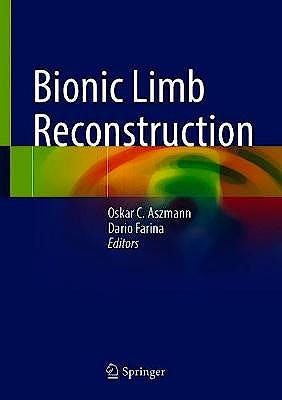 This book presents the latest techniques in amputation rehabilitation and summarizes the most recent research findings in the field of bionic limb reconstruction. Divided into seven parts written by experts in the field, it provides valuable information on e.g. upper extremity injuries, psychological considerations, prosthetic engineering, and surgical and rehabilitation strategies. Illustrative figures and photos of real-life settings further assist understanding. This book is of interest not only for plastic surgeons, but also for hand surgeons, orthopedic and trauma surgeons as well as therapists, prosthetists and engineers.

Oskar C. Aszmann studied medicine at the University of Vienna, Austria, and received his medical degree in 1994. From 1994 to 1997, he was research fellow at the Department of Orthopedic Surgery, John Hopkins Hospital, Baltimore, USA. Until 1997, he was also staff scientist at the Department of Anatomy and Cell Biology, University of Maryland, USA. He was born in Vienna, Austria, and after working at the University Hospital Vienna for six years, he specialized as a plastic surgeon in 2004. In 2012 Professor Aszmann established a Center for Extremity Reconstruction and Rehabilitation to explore the possibilities and limits of bionic reconstruction, and has since been head of this center, which focuses on recovery and rehabilitation patients with impaired extremity function. Dario Farina received Ph.D. degrees in automatic control and computer science and in electronics and communications engineering from the Ecole Centrale de Nantes and Politecnico di Torino, respectively, and an Honorary Doctorate degree in Medicine from Aalborg University. He is currently Full Professor and Chair in Neurorehabilitation Engineering at the Department of Bioengineering of Imperial College London. He has previously been Full Professor at Aalborg University and at the University Medical Center Goettingen, Georg-August University, where he founded and directed the Department of Neurorehabilitation Systems, acting as the Chair in Neuroinformatics of the Bernstein Focus Neurotechnology Goettingen. His research focuses on neurorehabilitation technology, neural control of movement, and biomedical signal processing.