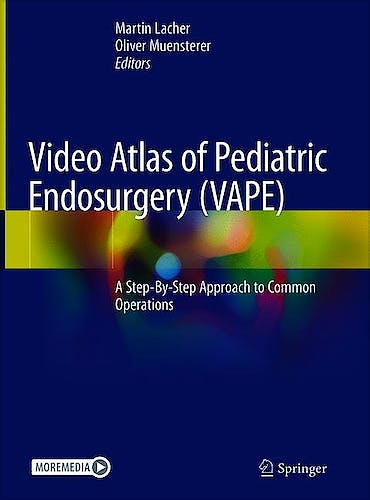 This book brings together state of the art endosurgical techniques on abdominal, gastrointestinal, colorectal and thoracic operations in children, as well as operations of upper urological tract. Each chapter is complemented by a corresponding video of the described procedure, featuring critical maneuvers, useful tips, and alternative approaches. The book itself summarizes each operation, containing illustrations about positioning in the operation theatre, the most important steps of the surgical procedures and the managing of possible complications. The videos are accessible through different devices including desktop or laptop computers, tablets, as well as smartphones, allowing both novice and experienced surgeons to review the procedures on the go, during rounds, or in the operating room. The book and accompanying videos are therefore an invaluable guide for pediatric surgeons as well as young surgeons at the start of their career.

Martin Lacher received his medicine degree from the University of Cologne and successfully completed the United States Medical Licensing Exam (USMLE). From 2002-2010 he underwent surgical training in General Surgery and Pediatric Surgery. From 2010 to 2011 he successfully completed a Fellowship in Pediatric Endosurgery at the University of Alabama at Birmingham/USA. In the years 2012-2015 he worked as a staff surgeon at the Department of Pediatric Surgery at Hannover Medical School. Since October 2015 he is surgeon in chief and director of the department of pediatric surgery at the University of Leipzig, Germany. Martin Lacher is board certified for both Pediatric Surgery and General Surgery. He has participated in surgical missions in various countries including Vietnam, China, Tanzania and North Korea. His research activities started with investigating genetic and non-genetic causes of inflammatory bowel diseases and Hirschsprungs disease. Martin Lacher is chair of the research committee of the International Pediatric Endosurgery Group (IPEG). For his PhD thesis on the genetics of inflammatory bowel diseases he received the Richard Drachter award of the German Society for Pediatric Surgery in 2012. Martin Lacher is reviewer of a variety of surgical peer-reviewed journals, editorial board member of the European Journal of Pediatric Surgery and editor-in-chief of the European Journal of Pediatric Surgery Reports.