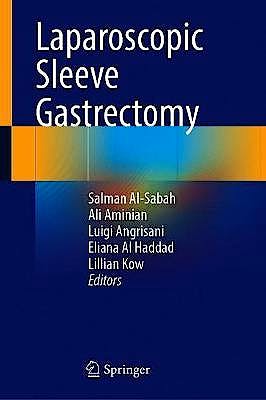 This book provides a complete guide to laparoscopic sleeve gastrectomy and the management of obesity. The chapters discuss guidelines for healthcare providers for the management of patients with obesity, the rationale behind choosing patients, performing the procedure in line with the patient's condition, the perioperative period, postoperative requirements, and postoperative complications.

This book aims to give readers an understanding of the surgical techniques involved in laparoscopic sleeve gastrectomy and the wider treatment options available. It is relevant to bariatric, metabolic, and general surgeons, physicians, clinical nutritionists as well as students.

Dr. Salman Al-Sabah is the Chairman of Surgery at Jaber Al-Ahmad Al-Sabah Hospital, Kuwait, and an associate professor at Kuwait University. He graduated from Kuwait Medical School and completed his residency in General Surgery and Master of Management and Health Leadership and Fellowship in Minimal Invasive and Bariatric Surgery at McGill University, Canada. He has contributed to several international presentations as a speaker, moderator, and publications in the field of Minimally Invasive and Bariatric Surgery. His principal clinical foci are Metabolic/Bariatric Surgery, Minimally Invasive Surgery, Advanced Endoscopy, Health Policy, and research. Additionally, Dr. Al-Sabah is on the editorial board and reviewer of international peer-review journals. He is the founder and President of the Gulf Obesity Surgery Society, the Kuwait Association of Surgeons and Governor for Kuwait at the American College of Surgeons. Dr. Al-Sabah's research has been the foundation in the establishment of international guidelines in the fields of gastroenterology and metabolic and bariatric surgery. He is also the recipient of the prestigious 2018 Scientific Production Prize from the Kuwait Foundation for the Advancement of Sciences (KFAS) for his contributions in the field of Medical Health and Allied Sciences. Dr. Al-Sabah was instrumental in establishing the Kuwait National Bariatric Registry.

Ali Aminian, M.D., is Director of Bariatric and Metabolic Institute at the Cleveland Clinic. He is an Associate Professor of Surgery at the Cleveland Clinic Lerner College of Medicine. His clinical interests include gastrointestinal surgery, advanced laparoscopic surgery, and specifically surgery for severe obesity, diabetes, and metabolic disease. As an academic surgeon at the Cleveland Clinic Main Campus in Cleveland, Ohio, United States, Dr. Aminian has been involved in clinical and experimental research on the role of minimally invasive gastrointestinal procedures in management of obesity, diabetes, metabolic disease, and fatty liver disease. He has an outstanding record of peer-reviewed publications (200+) in high impact journals including New England Journal of Medicine, JAMA, Diabetes Care, and Annals of Surgery. His studies have been widely covered by the media such as New York Times, Wall Street Journal, TIME, Reuters, Forbes, and among the others.

Prof. Luigi Angrisani born in Naples. He received master's degree with honours in Medicine and Surgery at the University "Federico II" of Naples and postgraduate degree and medical practice in London, Pittsburgh, Lyon, Bombay, New York, Los Angeles, Birmingham, and Cambridge. He is Director of the Unit for General and Laparoscopic Surgery at San Giovanni Bosco Hospital in Naples; Professor of General Surgery at the Federico II University of Naples, Italy; and Past President of the Italian Society for Obesity and Metabolic Diseases (SICOB). He involved in editorial activity with several publications in the bariatric field worldwide. He is an Associate Editor of the scientific journal Obesity Surgery (Springer). He is Past President of IFSO, International Federation for the Surgery of Obesity and Metabolic Disorders; Chairman IFSO Board of Trustees; and President of IFSO World Congress Rome 2022.

Dr. Eliana Al Haddad obtained her bachelor's degree in biology from the American University of Beirut. She then graduated from Lebanese American University Gilbert and Rose-Mary Chagoury School of Medicine in 2016. After which, she completed a three-year postdoctoral research fellowship in congenital cardiac surgery at Columbia University Medical Center in New York. She has contributed to several international publications in the fields of bariatric and general surgery, as well as pediatric cardiothoracic surgery. She is currently working as a postdoctoral research fellow in the field of bariatric and general surgery with Dr. Salman Al Sabah. Her principal foci are research in the fields previously mentioned. Additionally, Dr. Al Haddad is on the editorial board and a Reviewer of international peer-reviewed journals.

Lilian Kow is a Senior Consultant Surgeon at Flinders Medical Centre and Clinical Associate Professor at Flinders University of South Australia. She has been involved in training surgeons in bariatric surgery nationally and internationally. Lilian Kow was born in Malaysia. Her family migrated to Adelaide, Australia, where she completed her high school and qualified to study medicine at the Flinders University of South Australia. She went on to complete a Ph.D. in Neuroscience in the School of Medicine at the Flinders University of South Australia. Her thesis entitled "A systemic study of the regulation of intestinal motility in an organ culture system" was awarded by Flinders University of South Australia in 1996. After completing her advanced surgical training in general surgery, she became a Fellow of the Royal Australasian College of Surgeons FRACS in 1996. Lilian is a Co-Founder/Director of the Adelaide Bariatric Centre, which was established in 1995 as the first obesity surgical clinic in Adelaide. Over the years, Lilian has visited many bariatric clinics around the world and is of the firm belief that bariatric surgery works better with an effective support programme. Lilian has been at the forefront along with her colleagues at the Adelaide Bariatric Centre in developing a very effective multidisciplinary programme for supporting their patients in their weight loss journey. The programme in Adelaide was one of the initial ones adopted in Australia and internationally and the first to be used in South Australia. Lilian and her colleagues have been firmly committed to providing this very important multidisciplinary support for our patients: a programme which clearly makes the Adelaide Bariatric Centre the leading centre for the management of weight loss in South Australia and one of the leading centres in Australia. She is the President of IFSO and the Past President of the IFSO-APC and the Obesity Surgical Society of Australia and New Zealand OSSANZ (ANZMOSS). She also runs the Education Portfolio as the executive member for Australian Chinese Medical Association (SA).