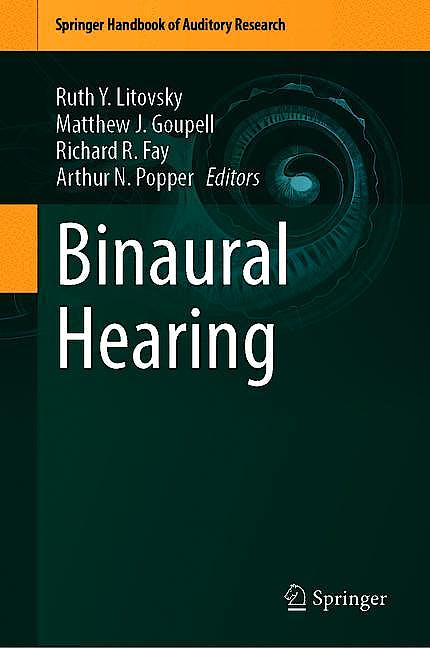 This chapter will provide an historical perspective on studies in the area of binaural psychophysics, focusing on the approaches uses to measure sensitivity in humans, interpretation of findings in the context of binaural models, and current understanding of the relative importance of the primary binaural cues. Bill Hartmann is a known expert in this field with a deep understanding of the historical significance of both modeling and psychophysical studies.

This chapter will provide an overview of the historical and theoretical perspectives of binaural anatomy and physiology in avian species, where much of the binaural circuitry and findings using modeling approaches have led the way over a number of decades. The chapter will help to introduce the volume's chapters in a manner that integrates their content.

This chapter will focus on most recent work in neural circuits that are thought to be responsible for binaural sensitivity. In the mammalian system there have been some critical studies showing that inhibitory circuits play an important role in determining how brainstem neurons mediate sensitivity to ITDs. The biophysics and cellular biology involved in this intricate work has led to the paradigm shifting and rethinking of the models that were proposed early on to account for binaural sensitivity. Philip Joris and Nace Golding have been steadily working on this problem for two decades and their work is at the forefront of the field.

This chapter will provide an overview of how slow modulations affect ITD and ILD processing. Slow modulations restore ITD sensitivity at high frequencies, but only for relatively slow rates. This chapter will thus discuss frequency effects, how temporal fine structure and envelope are used at different frequency regions, and how there is an onset dominance for localization of sounds. The last point is related to the precedence effect. Chris Stecker and Andrew Brown are experts in the area of temporal weighting and the observer weighting paradigm, and will be able to broadly discuss all forms of temporal modulations on binaural processing.

This chapter will also highlight frequency effects of binaural processing, but now highlighting how binaural cues combine across channels to form a single auditory location percept. The types of studies that will mostly be highlighted concern those that use different ITDs and ILDs in different channels. The binaural interference paradigm is a common version of this. Another type of study includes stimuli that have slowly varying ITDs across different frequencies (i.e., they show curvature), which motivated the standard model concerning "straightness" and "centrality" of binaural processing. Virginia Best has performed many binaural interference studies; Steve Colburn helped develop the modeling theories of straightness and centrality.

6) Physiology of higher central auditory processing and plasticity in mammals [AE: RYL] Potential contributor(s): Jenny Bizley and a co-author to be selected by Dr. Bizley

This chapter will review and discuss animal models that have been used to investigate binaural hearing using approaches aimed at probing the role of neural plasticity. Studies in this area focus on learning, training, intervention with monaural deprivation and restoration of hearing. The work is paramount to our understanding of how the auditory system functions in conditions where deprivation leads to temporary and long-term changes in spatial mapping needed for sound localization and the ability to segregate target stimuli from masking sounds.

This chapter will review how the auditory system is involved in object formation, what role different brain regions play in order to achieve the sound source identification in the presence of distracting or unimportant sounds in the environment. Barbara Shinn-Cunningham is a leading expert on object formation and auditory attention. In addition, the chapter will review the "cocktail party problem" in the context of the role that binaural hearing and information masking contribute to the ability of listeners to identify the content of target speech and ignore information present in distracting/interfering sources in the environment. Gerald Kidd and Christine Mason are known experts who have published extensively on this topic.

This chapter will describe the classic testing paradigm, the binaural masking level difference, which shows how the binaural system's sensitivity to small interaural differences can improve tone thresholds. This paradigm can be expanded to more complex stimuli, like speech in noise. Performance in such tasks has been related to listener's ability to achieve spatial release from masking. A formal model relating these topics has been produced and refined by Lavandier and Culling, which explains spatial masking release across a wide variety of environments (like reverberant rooms) and listener populations (including people who use cochlear implants).

This chapter will be a broader discussion of the effects of reverberation and spatial hearing in rooms on understanding speech. It will include effects of learning the rooms, time reversing signals, etc. Pavel Zahorik is one of the world's experts in this topic.

This chapter will provide a broad overview of the modeling approaches that are applied to binaural hearing, from basic signal processing models to biophysical models. Matthia s Dietz and Laurel Carney are both modeling experts, with backgrounds in perception and neurophysiology.

This chapter will discuss how hearing impairment and aging degrade binaural hearing abilities, as well as the functional consequences that occur. Included in this will be a discussion of clinical approaches to mediate the problems that occur in clinical populations. Erick Gallun and Nirmal Srinivasan are experts in these are as, with many recent publications.

13) Multisensory (or multisystem) [AE: RYL] Potential contributor(s): William A. Yost (and co-author) In order to localize sounds in the environment, we need to be able to have a more integrated sense of the environment and to perceive spatial cues in that context.

This chapter will address an important topic related to multisystem integration in sound source localization. This topic has been noted in the literature for many years but has received more attention in recent years, and is timely and relevant to most of the topics covered in this book. Bill Yost is an expert on this topic, whose current area of research bridges important areas in the field that focus on multisensory spatial hearing.

The field of Binaural Hearing involves studies of auditory perception, physiology, and modeling, including normal and abnormal aspects of the system. Binaural processes involved in both sound localization and speech unmasking have gained a broader interest and have received growing attention in the published literature. The field has undergone some significant changes. There is now a much richer understanding of the many aspects that comprising binaural processing, its role in development, and in success and limitations of hearing-aid and cochlear-implant users.

The goal of this volume is to provide an up-to-date reference on the developments and novel ideas in the field of binaural hearing. The primary readership for the volume is expected to be academic specialists in the diverse fields that connect with psychoacoustics, neuroscience, engineering, psychology, audiology, and cochlear implants. This volume will serve as an important resource by way of introduction to the field, in particular for graduate students, postdoctoral scholars, the faculty who train them and clinicians.

Dr. Ruth Litovsky is a Professor of Communication Sciences & Disorders at the University of Wisconsin-Madison, with a joint appointment in Surgery, Division of Otolaryngology.

Dr. Matthew Goupell is an Associate Professor of Hearing and Speech Sciences at the University of Maryland, with affiliate appointments in the Neuroscience and Cognitive Science program and in Physics.

Dr. Arthur N. Popper is Professor Emeritus and research professor in the Department of Biology at the University of Maryland, College Park.