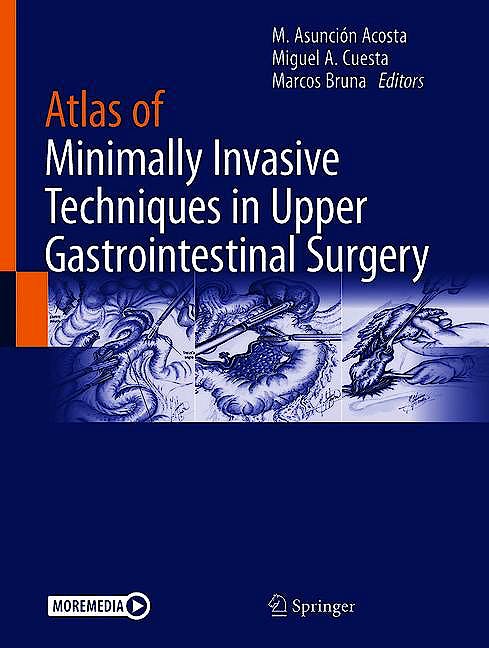 This Atlas comprehensively covers minimally invasive operative techniques for benign and malignant cancer surgery of the esophagus and stomach. It provides easy-to-follow instructions accompanied by a range of pictures and illustrations, as well as a collection of interactive videos to aid the reader in developing a deeper understanding of each surgical procedure. Techniques covered include minimally invasive surgical treatment for esophageal and gastric cancer including different approaches such as thoracoscopic, transhiatal, laparoscopic, and robot-assisted resections. These chapters include different types of cervical and intrathoracic anastomoses after esophageal resections, and different anastomoses and reconstructions after gastrectomy. Moreover, the Atlas includes an extensive description of minimally invasive procedures in bariatric surgery including sleeve resection, gastric bypass, biliopancreatic diversion, and others. Minimally invasive approaches for other benign pathologies such as benign tumors and treatment of gastroduodenal ulcer complications are also depicted. All chapters, written by a renowned and experienced international group of surgeons and their teams, are focused on practical step-by-step description of the techniques.

Atlas of Minimally Invasive Techniques in Upper Gastrointestinal Surgery systematically describes the most frequently performed surgical procedures of the esophagus and stomach and is a valuable resource for all practicing surgeons and trainee general surgeons dedicated to upper gastrointestinal surgery, such as bariatric and surgical oncologists.

Maria Asuncion Acosta-Merida is Head of the Department of Esophagogastric, Endocrinometabolic, and Obesity Surgery at the University Hospital of Gran Canaria, Dr. Negrin, an expert in bariatric surgery, and a member of the multiple organ-harvesting team at her hospital. She is also a Professor of Digestive Surgery at the University of Las Palmas de Gran Canaria and a member of the Board of Esophagogastric and Minimally Invasive Surgery of the Spanish Association of Surgeons, as well as the Spanish Society for Obesity Surgery. M. Asuncion also directs several national courses on bariatric and esophagogastric surgery and has authored scientific publications on various aspects of gastrointestinal surgery.

Miguel A. Cuesta is Professor Emeritus of Gastrointestinal and Minimally Invasive Surgery at the Amsterdam UMC, in Amsterdam, the Netherlands. After his publication as editor in 1993 of the book Minimally Invasive Surgery in Gastrointestinal Cancer, considered a pioneer work in the use of minimally invasive surgery (MIS) in oncological surgery, he has focused on researching the use of MIS in digestive oncology. He has participated and initiated different randomized controlled trials concerning colorectal and upper GI surgery comparing open and MIS approaches.

Marcos Bruna currently works as a surgeon in the Department of General and Digestive Surgery at the Hospital Universitario de Valencia y Politecnico La Fe (Spain). His research primarily involves Gastroenterology, Hepatology, and Nutrition and Dietetics. He is specialized in upper GI surgery, both oncological and bariatric, and has participated in research concerning minimally invasive surgery, bariatric, and metabolic surgery. Moreover, he is currently involved in studies on enhanced recovery after surgery for esophagogastric cancer