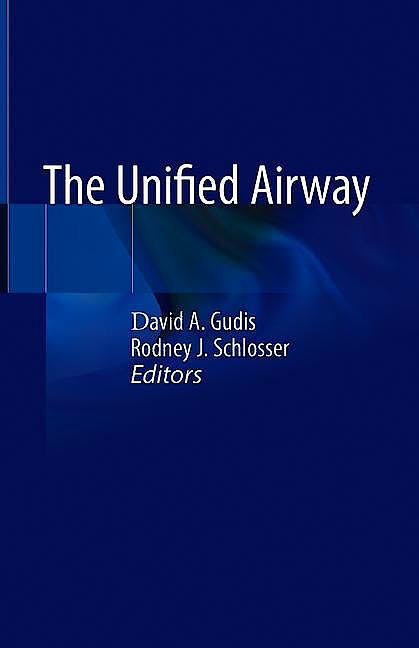 In recent years, our understanding of the unified airway concept has become paramount in the diagnosis, treatment, and management of sinonasal, airway, and respiratory disorders. The relationship between sinonasal inflammatory disorders, such as chronic rhinosinusitis, and pulmonary disorders, such as asthma or cystic fibrosis, is being examined more closely than ever before. This volume comprehensively reviews and discusses the unified airway approach, and more closely examines the relationship between sinonasal inflammatory disorders and pulmonary disorders. The text is formatted as an easy to read reference with bulleted points and sample case studies that maximize the clinical value of the evidence and data described. In addition to exploring chronic rhinosinusitis in patients with asthma and cystic fibrosis, other topics include pediatric chronic rhinosinusitis, aspirin-exacerbated respiratory disease, chronic bronchiectasis, primary ciliary dyskinesia, immunodeficiencies, and the unified airway microbiome. Rhinologic Disease and Respiratory Disorders will be an invaluable guide for practicing otolaryngologists, allergists, pulmonologists, otolaryngologists-in-training, and rhinologists.

Dr. David A. Gudis, M.D., is the Chief of the Division of Rhinology and Anterior Skull Base Surgery in the Department of Otolaryngology - Head and Neck Surgery at Columbia University Irving Medical Center/NewYork-Presbyterian Hospital. In addition to being a board-certified otolaryngologist, Dr. Gudis is dual-fellowship trained both in Rhinology: Advanced Endoscopic Sinus and Skull Base Surgery and in Pediatric Otolaryngology. Dr. Gudis pursued his medical education at the University of Pennsylvania Perelman School of Medicine, where he was the recipient of the Russel J. Stumacher M.D. Award. He then completed his residency in Otorhinolaryngology - Head and Neck Surgery at the University of Pennsylvania and the Children's Hospital of Philadelphia (CHOP). He completed a fellowship in Pediatric Otolaryngology and Craniofacial Surgery, followed by a fellowship in Rhinology: Advanced Endoscopic Sinus and Skull Base Surgery, at the Medical University of South Carolina in Charleston, South Carolina. Dr. Gudis' clinical interests include the medical and surgical treatment of chronic sinusitis, revision sinus surgery, sinonasal polyposis, sinonasal tumors, skull base tumors, cerebrospinal fluid (CSF) leaks, endoscopic skull base surgery, and endoscopic orbital surgery. His research interests include rhinologic conditions in patients with pulmonary disease, such as cystic fibrosis and asthma, and novel surgical techniques for minimally invasive endoscopic skull base surgery for brain and orbital tumors. He is the author of over 50 peer-reviewed publications and textbook chapters, and he is regularly invited to present his work at national and international conferences.

Rodney J. Schlosser, M.D., is the Chief of the Division of Rhinology and Anterior Skull Base Surgery and Director of the Nose and Sinus Center at the Medical University of South Carolina. After graduating from the U.S. Military Academy at West Point and serving four years of active military duty in the U.S. Army, Dr. Schlosser received his medical degree from the Mayo Clinic. He then completed his Otolaryngology residency at the University of Virginia followed by an additional year of study during a fellowship devoted exclusively to the treatment of advanced sinus disease at the University of Pennsylvania with David W. Kennedy, M.D., one of the premier sinus surgeons in the world. Dr. Schlosser has written a textbook on the management of sinus problems and more than 200 articles and chapters dealing with sinus and nasal topics. He regularly travels around the world to speak and teach courses on the latest techniques in endoscopic sinus surgery and computerized image-guided surgery. Dr. Schlosser focuses primarily on difficult adult and pediatric sinus cases, nasal obstruction, revision surgeries, sinonasal tumors, encephaloceles/cerebrospinal fluid leaks, severe nasal polyposis, smell and taste disorders, and congenital nasal disorders.