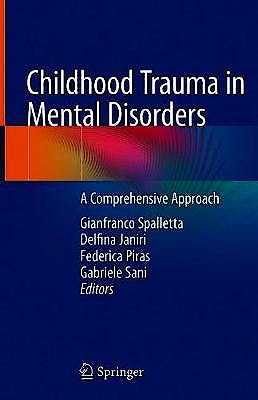 This volume presents a comprehensive overview of childhood trauma, considering the psychopathological definition and its neurobiological implications as well as its impact on different psychiatric disorders. The focus on childhood trauma rather than that occurring in adulthood is important due to its general "neuro-psyco-socio" and its specific biological implications, since trauma during childhood impacts directly on neurodevelopment. It has been suggested that early life stress increases vulnerability to psychiatric disorders; however, the exact mechanisms of this association are not yet completely understood. Although childhood trauma could be considered too unspecific to be an important risk factor for individual psychiatric disorders since it seems to occur across the board, it impacts differently on different psychiatric disorders, and it can modulate their clinical expression. Therefore, the assessment of early trauma needs to be included in the clinical evaluation of patients with psychiatric disorders. The volume will be an invaluable tool for psychiatrists, helping them to select suitable pharmacological, psychotherapeutic and rehabilitative treatments.

Gianfranco Spalletta is a psychiatrist and has a PhD in Neuropsychology. He is the head of the Laboratory of Neuropsychiatry and the clinical director of the Neuropsychiatric Outpatient Clinic and the Memory Clinic of the IRCCS Santa Lucia Foundation in Rome. He teaches Psychiatry at the speech therapy, the nursing and the international medical schools of the Tor Vergata University in Rome. In 2013 he was Visiting Professor at the Department of Psychiatry of the University of Iowa, and in 2014 at the Baylor College of Medicine, Houston, TX. In 2015 he was nominated Adjunct Associate Professor in the Menninger Department of Psychiatry & Behavioral Sciences at the Baylor College of Medicine of Houston, Texas, USA. He is the author of 300 manuscripts published in peer reviewed international journals and 10 book chapters (Psychiatry, Psychology, Neurology and Neuroscience fields). He edited the book Brain Morphometry of Springer Protocols. He has collaborations with Academic Departments in Iowa City, Houston, Dublin, Gottingen, Hannover, and UElm. He is currently funded by the European Commission and the Italian Ministry of Health.

Delfina Janiri is a psychiatrist currently working at the Gemelli University Hospital in Rome, Italy (Fondazione Policlinico Universitario Agostino Gemelli IRCSS) and a PhD student at the Department of Psychiatry and Neurology of Sapienza University in Rome. In 2018 and 2019 she was research fellow in the lab of Professor Sophia Frangou at the Department of Psychiatry at the Icahn School of Medicine at Mount Sinai in New York, USA. In recognition of her research achievements, Dr Janiri was awarded the 2019 Samuel Gershon Junior Investigator Award by the International Society for Bipolar Disorders and was invited to join the editorial board of Bipolar Disorders. She also received the Research Prize of the European Psychiatry Association during their annual meeting in 2019. She is author or co-author of 28 international, peer-reviewed publications and a book chapter. Her research activity aims at improving our understanding of the core pathophysiological processes underlying risk, disease expression and resilience to mood disorders by integrating neuroimaging procedure with cognitive, genetic and developmental measures. She is particularly interested in investigating the relationship between clinical course and childhood traumatic experiences in mood disorders. Recently, she focused on brain alterations related to early traumatic experiences in patients with bipolar disorders. She is an active member of various Italian and International psychiatric associations and societies and member of the Editorial board of Bipolar Disorders and Frontiers in Psychiatry, section of Aging. She carries out clinical assistance activity since 2015 specifically focusing on pharmacological treatment, psychological and psychoeducational support to patients with bipolar disorders.

Federica Piras is a Research Fellow at the Fondazione Santa Lucia's Neuropsychiatry Laboratory, where she is responsible for neuropsychological test selection for cognitive impairment classification, and designing experimental research on psychiatric and neurodegenerative diseases. A speech pathologist (1989), experimental psychologist (2005) and Doctor of Philosophy in Cognitive Neuroscience (2009), her research interests span from the perception of temporal intervals (in healthy subjects and in psychiatric disorders) to neurocognitive rehabilitation and cognitive stimulation in brain-injured patients, and healthy and pathological aging. She completed her pre- and post-doctoral training at outstanding research facilities with world-renowned experts like Kia Nobre (the Brain & Cognition Lab, University of Oxford), Jennifer Coull (Laboratoire des Neurosciences Cognitives, Aix-Marseille Universite) and Neils Birbaumer (Institute for Medical Psychology and Behavioural Neurobiology University Tubingen, winner of the "Albert Einstein" World Award of Science). Dr.Piras is actively involved in undergraduate teaching and PhD student supervision. She has contributed to four books, and published numerous peer-reviewed papers in high impact journals. She is an active member of the Timing Research Forum, an open academic society for promoting multidisciplinary research on timing and time perception, and is also part of ENIGMA (Enhancing Neuro Imaging Genetics through Meta-Analysis) Obsessive Compulsive Disorder Consortium, which brings research groups from 16 different countries worldwide together to share neuroimaging and genetic databases. She has been involved in several EU and nationally funded research projects and is currently working on three Future and Emerging Technologies (FET) proposals

Gabriele Sani is Associate professor of Psychiatry at Universita Cattolica del Sacro Cuore, in Rome, Italy. In 2003 he was Visiting Scientist at McLean Hospital of the Harvard Medical School in Boston. He is author/co-author of more than 100 international, peer- reviewed publications, 17 book chapters and 2 books. His research activity mainly focuses on clinical aspects of mood disorders, with particular reference to bipolar disorder, temperament, rapid cycling, mixed states and specifically, agitated depression, drug treatment, the concept of comorbidity and suicide. Recently, he addressed his interest to childhood trauma and its role in the pathogenic mechanisms of psychiatric disorders. He is an active member of various Italian and International psychiatric associations and societies and he is Member of the Editorial board or Associate Editor of various peer-reviewed journals. He carried-out continuous clinical assistance activity from 2001 to 2019 at the Sant'Andrea Hospital in Rome. He is currently working at the Gemelli University Hospital in Rome, Italy (Fondazione Policlinico Universitario Agostino Gemelli IRCSS). From 2001 onwards, he conducts regular clinical and research activity at the Lucio Bini Centre, Rome, which is renowned for the diagnosis and treatment of manic-depressive illness and was founded by Dr Athanasios Koukopoulos.