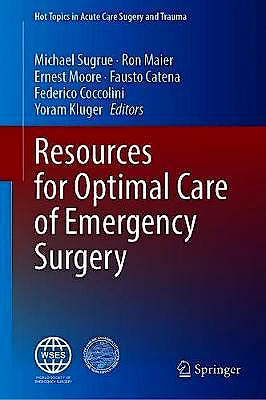 Variability in care in emergency surgery is well known, particularly in abdominal surgery, and reducing it is fundamental to improving outcomes. It is therefore vital to identify the factors that are key to improving mortality and reducing complications in various surgical emergencies. Under the leadership of the World Society of Emergency Surgery, over 200 leading experts in emergency surgery, critical care and surgical infections established a template to help define and optimise emergency surgery, particularly that relating to the abdomen. This book refines this initial work, crystallising it into a meaningful resource for practising surgeons and health care administrators alike, and paving the way for advances in emergency surgery around the globe. This book sets a benchmark for Emergency Surgery and is a must read for those wanting their patients to do better.

Michael Sugrue is Consultant Surgeon at Letterkenny University Hospital and University Hospital Galway Ireland. He qualified from University College Galway and during his 20 years at Liverpool Hospital in Sydney he obtained his MD for his work on intra-abdominal pressure and renal failure, on which he has published widely. He has achieved many awards for his educational initiatives, including the ESR Hughes Medal from the Australasian College of Surgeons in 2008. He has published over 150 papers. Michael is a busy surgeon on call at one of Ireland busier Emergency Surgery Hospitals. He enjoys his clinical work and surgery. He is lead in emergency surgery the EU funded emergency surgery outcome advancement project.Ron Maier earned his bachelor's degree from the University of Notre Dame and his M.D. from Duke University. He first came to the University of Washington to complete his general surgery residency. After a postdoctoral fellowship in immunopathology, he returned to the University of Washington as an attending surgeon. After 30 years as a faculty member, he is now the surgeon-in-chief of Harborview Medical Center, and professor and vice-chair of surgery at the University of Washington and is listed in "The Best Doctors in America."

Ernest Moore has been the editor of the Journal of Trauma and Acute Care Surgery since 2012, and was the chief of trauma at the Denver General Hospital for 36 years, chief of surgery for 28 years, and the first Bruce M. Rockwell Distinguished Chair in Trauma Surgery. He continues to serve as vice chairman for Research and is a Distinguished Professor of Surgery at the University of Colorado Denver.

Fausto Catena is currently chief of the Emergency Surgery Department, Parma University Hospital, Italy. Until 2011, he worked as a consultant general surgeon at the Dept. of General, Emergency and Transplant Surgery of the St Orsola-Malpighi University Hospital, Bologna, Italy. He is editor-in-chief of the World Journal of Emergency Surgery, former editor of European Surgical Research, editor of the Open Cardiovascular and Thoracic Surgery Journal, the World Journal of Gastroenterology and many other top ranking journals as well as a member of the Committee on Publication Ethics. He is general secretary of the World Society of Emergency Surgery.

Federico Coccolini, MD, is currently working as a general, emergency and trauma surgeon at the General, Emergency and Trauma Surgery Dept. of Bufalini Hospital in Cesena (Italy). His main fields of interest are emergency surgery, trauma surgery, trauma patient management, as well as emergency and trauma system organization and implementation, and abdominal surgery. He has published widely (more than 100 papers) and has written several book chapters, most of them as first author. He is the main investigator of IROA (International Register of Open Abdomen), the widest multicenter cohort study on open abdomen patients ever performed, which is recruiting hundreds of patients from all around the world.

Yoram Kluger, MD is the chief of the division of general surgery and the medical director of the pancreatic surgery service at Rambam Health Care Campus. He is Associate Professor of Medicine at the Technion-Israel Institute of Technology's Ruth & Bruce Rappaport Faculty of Medicine and was recently appointed chairman of the Department of Surgery at the Faculty of Medicine. Founder and director of the Rabin Trauma Center at Tel Aviv Medical Center, he was the first in Israel to establish a dedicated hospitalization center for patients with multiple injuries. He is recognized worldwide for his research on medical preparedness and medical infrastructure management in mass casualty situations. He holds a position on the board of the World Society of Emergency Surgery and is the Israeli delegate to the European Society for Emergency Surgery and Trauma. Dr. Kluger has published more than 220 scientific papers.