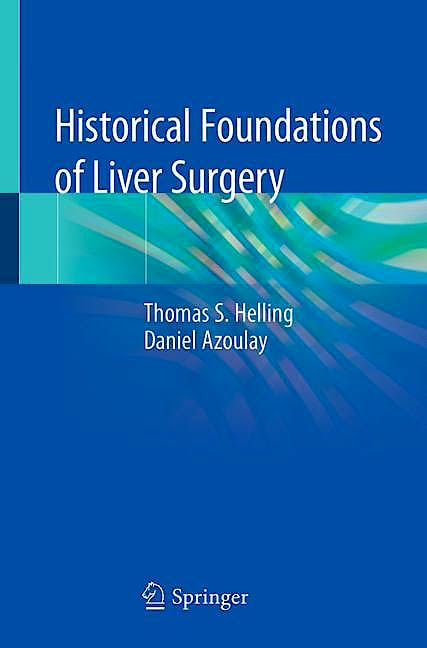 Chapter 2. The Bold Adventure of Lortat-Jacob
Lortat-Jacob's sentinel operation in 1951 heralded as the first successful major hepatectomy is portrayed as are other earlier attempts at liver resection both in Europe and the United States.

Chapter 4. The Art of Operating
Development of surgery in the Nineteenth Century is described along with first attempts at elective resection of liver substance.

Chapter 5. Fin de Siecle: Marvels of the Age
Continued attempts at liver resection highlighted the closing days of the Nineteenth Century, a crucial time for surgery. Both European and Americal experiences in liver surgery are discussed.

Chapter 6. The World Wars and Hemorrhage Control
Both World War I and II brought to light the importance of operative support of the surgical patient and allowed for complex monitoring and resuscitation of patients undergoing complex operations like liver resection.

Chapter 7. A World-Wide Phenomenon:
Liver Surgery in the Far East
An account of Twentieth Century work by notable Asian surgeons such as Ton That Tung in Indochina and Professor Lin in Formosa (Taiwan) is presented along with their contrbutions to surgery and surgical anatomy of the liver.

Chapter 8. Beginning the Modern Era
This chapter discusses the explosion in liver surgery that followed Lortat-Jacob's report in Paris - both in Europe and America

Chapter 9. The Anatomists
Without careful delineation of the intricate anatomy of the liver, major liver surgery would be unthinkable and largely disasterous. This chapter illustrates those that defined the delicate vascular and biliary pathways within the liver substance.

Chapter 10. The French School
With plentiful patient populations by virtue of the French public health system innovative French surgeons embarked on pioneering efforts in liver surgery culminating in Lortat-Jacob's operation and a burdgeoning experience in the wake of early successes

Chapter 11. Bach, Beethoven, and Brahms
Stig Bengmark, Henri Bismuth, and Leslie Blumgart have been recognized as the virtuosi of liver surgery. This chapter chronicles their rise and achievements in liver resection.

Chapter 13. Splitting the Soul
The marvels of hepatic surgery brought about by transplant experience are detailed in this chapter including various operative techniques in resection of tumors and reconstruction of hepatic anatomy as a result.

Chapter 14. On Regeneration
Key to any aggressive surgery for resection of liver substance is the ability of the liver to regenerate. This chapter addresses attempts to understand and regulate hepatic regeneration.

For the surgeon of antiquity the liver has been an organ of mystery - and danger. Attempts to repair its wounds or remove tumors were fraught with hemorrhage and often a fatal outcome. Most forays were those to remove easily accessible tumors on the liver edge, but bleeding was a feared consequence still and surgeons wielded a plucky fortitude to take on even those. Not until the mid-20th Century were surgeons able to safely excise neoplasms that lay deep within the liver substance. Jean-Louis Lortat-Jacob achieved notoriety in his famous Paris hepatectomy of 1951 but he was not the first. That distinction may have belonged to German Professor Walther Wendel in 1910 or to Japanese surgeon Ichio Honjo who reported his operation in 1950, but in Japanese. It was not picked up by the Western surgical community until 1955.

Names such as Hugo Rex, James Cantlie, Jean-Louis Lortat-Jacob, Ton That Tung, Jacques Hepp, Claude Couinaud, Henri Bismuth, Thomas Starzl, Roy Calne, and a host of others highlight the extraordinary curiosity, tenacity, and skill of those surgeons who broached unknown territory to master understanding and techniques of manipulation, resection, and transplantation that were formerly considered unapproachable by the surgical world.

Thomas S. Helling MD is currently tenured Professor of Surgery at the University of Mississippi Medical Center and School of Medicine. Doctor Helling is in full time clinical practice. He has been interested and involved in hepato-biliary surgery for his entire career, spanning almost 40 years. He worked with Thomas Starzl MD in his fellowship in transplantation at the University of Colorado in 1978-79. Doctor Helling is a member of a number of prestigious surgical organizations including the American College of Surgeons, the Southern Surgical Society, the American Surgical Association, and the Americas Hepato-Pancreato-Biliary Association.

Daniel Azoulay MD PhD is an experienced liver surgeon and full-time faculty at the Hopital PAUL BROUSSE in Paris and Professor of Surgery at the University of Paris. He spent 21 productive years with Professor Henri Bismuth at the Centre Hepato-Biliaire of the Hopital Paul Brousse. Doctor Azoulay has published over 400 scientific articles and authored one book with Springer (Surgery of the Inferior Vena Cava) as well as more than 10 book chapters.