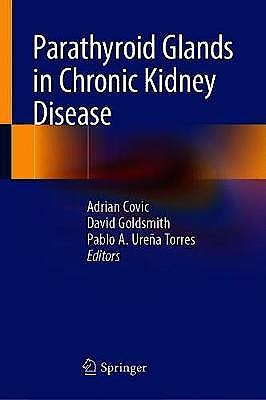 This concise book provides practical strategies to help nephrologists and endocrinologists correctly diagnose and treat the various forms of parathyroid disease they may encounter in the management of chronic kidney disease. Each chapter deals with various topics related to parathyroid gland anatomy and physiology, as well as diagnostic tests and their particularities in regard to chronic disease.

The book highlights the range of therapies used for the treatment of secondary hyperparathyroidism, and critically analyses the latest research in the field. Providing an up-to-date review of the current literature, including innovations in both medical and surgical treatment and current indications for parathyroidectomy, this practice-oriented book is an excellent resource for nephrologists, endocrinologists, endocrine surgeons and family medicine physicians.

Prof. Adrian Covic started his clinical and research activity as a fellow in Nephrology in Manchester and Amiens. Later he performed clinical research at the Case Western University in Cleveland, Ohio. He received a Ph.D. on: "Cardiovascular abnormalities and its determinant factors in chronic renal failure" in 1997. Since 2007, he is a FRCP (London) and became in 2009 a member of the Romanian Academy of Medical Sciences and in 2018 FRCP (Edin.). He is also a Fellow of the ERA EDTA (FERA) and a Fellow of the European Society of Cardiology (FESC).

He is a Professor of Nephrology and Internal Medicine at the "Grigore T. Popa" University of Medicine and Pharmacy, the Director of the Nephrology Clinic and the Dialysis and Transplantation Center in Iasi, Romania. In the past, he served as President of the Romanian Society of Nephrology and Secretary Treasurer of ERA-EDTA and has published more than 450 original and review papers in peer-reviewed journals, 16 books and 22 chapters. The current Hirsch Index is 48. He is an associate editor of NDT, editor-in-chief (Nephrology) of the International Journal of Urology and Nephrology, and editor / reviewer for several prestigious journals. His main areas of interest are: cardiovascular complications in renal disease, CKD-MBD, renal anaemia, peritoneal dialysis, and acute renal failure. He is the Vice-Rector (Research) of the University of Medicine "Gr. T. POPA" Iasi, Romania and a board member of KDIGO, ERBP, and ERA-EDTA working groups - EURECAM and EUDIAL. He has organized several regional European educational courses under the auspices of ERA EDTA and ISN. For a mandate, he has been chair of the ISN/COMGAN Eastern Europe.

Prof. David Goldsmith started his clinical and research activity at St Thomas' Hospital London. He performed clinical research there and in Manchester. He has consultant positions in Brighton then Guy's and St Thomas' Hospitals London since 1995. Since 2017, he has been Emeritus Consultant Nephrologist. He became Reader (2010) then Professor (2013) of Cardiorenal Medicine at King's College London, and Visiting Professor at the Cardiovascular Research Institute at St George's University of London (2014) and Honorary Professor at the "Grigore T. Popa" University of Medicine and Pharmacy (2006). He was on the ERA-EDTA Council from 2004-2008, Honorary Secretary and Executive Member of the UK Renal Association from 2004-2010. He was President of the LII ERA-EDTA Congress in 2015, one of the most successful ever. He has worked on UK RA clinical guideline groups, ERBP, CKD-MBD working group and KDIGO conferences over the last 20 years. He has had Visiting Professorships at Harvard and Bent Brigham Hospitals Boston in 2015 and has done lecture tours in the Gulf, Australia, and Scandinavia. He became FRCP (Lond) in 1999 and FRCP (Edin) in 2010. He was made FERA in 2011 and FASN in 2010. He was Honorary Treasurer of the RCP Edinburgh from 2016 - 2019. He is a Liveryman of the Worshipful Society of Apothecaries and obtained the Freedom of the City of London in 2010 and has published more than 500 original and review papers in peer-reviewed journals, 6 books and 32 book chapters. The current Hirsch Index is 57 and his Researchgate score 49.9 with nearly 20,000 citations. He was an Associate Editor of CJASN (2010-2014), subject editor for NDT, IUN, IJCP, and a reviewer for over 30 different journals over 20 years. His main areas of clinical and research interests are: cardiovascular complications of renal disease, CKD-MBD especially elevated phosphate, and renal anaemia. He has organised several regional European educational courses under the auspices of ERA-EDTA and ISN. He has consulted and spoken for over 30 pharmaceutical and device companies. His teaching skills, pastoral care and personal decorum are exemplary. He is an Associate Fellow of the Linnean Society of London, an Associate of the Faculty of Pharmaceutical Medicine, and is a global expert on the history, manufacture and consumption of whisky, attending many symposia and giving learned and erudite lectures on that topic around the world. As a true Renaissance man, he is a polymath of rare degree with diverse academic and intellectual interests from Artificial Intelligence, through Landscape Photography, Scandinavian History Culture Mores and Cuisine, Transhumanism and Life Extension Technologies, to Zebrafish.

Dr. Pablo Antonio Urena Torres is the Chief of Nephrology and Dialysis Services at the AURA Nord Saint Ouen, France, as well as a Consultant at the Service des Explorations Fonctionnelles at the Necker-Enfant Malades Hospital, Paris, France. He received his medical degree from the Madre y Maestra Catholic University, Santiago, Dominican Republic (1983), nephrology specialty certificate from the University of Paris V, France (1989), Master of Molecular Biology from Harvard University and the Massachusetts General Hospital of Boston, USA (1992), and a diploma in Bone Biology from the Faculte Lariboisiere, University of Paris VII (1996). Dr. Urena Torres has more than 25 years' experience in the field of diagnosis, prevention, treatment and progression of renal osteodystrophy or CKD-MBD (chronic kidney disease-mineral and bone disorders). He has investigated beta-2-microglobulin related dialysis amyloidosis; monoclonal growth of parathyroid cells in secondary hyperparathyroidism osteodystrophy; the cloning and characterization of the parathyroid hormone (PTH)/PTH-related peptide (PTHrP) receptor gene and its modification by the uremic situation; the regulation of phosphate and vitamin D by the axis fibroblast growth factor 23 (FGF23)/klotho; and the development of calcimimetics for treating secondary hyperparathyroidism. He is an active member of several societies, including the International Society of Nephrology, European Dialysis and Transplantation Association (ERA-EDTA), the American Association for the Advancement for Science (AAAS), the American Society for Bone and Mineral Research (ASBMR), the American Association of Nephrology, and the French Societe de Nephrologie. Dr Urena Torres has authored or co-authored more than 260 scientific publications in peer-reviewed journal as well as several reviews and chapters in textbooks.