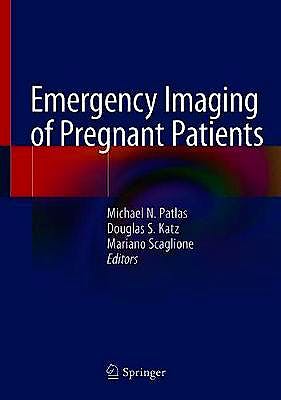 This book presents a comprehensive and modern approach to the imaging of nontraumatic and traumatic emergencies in pregnant patients. Readers will find a careful review of the relevant imaging-related clinical literature, explanation of imaging appropriateness criteria and guidelines, and enlightening discussion of current controversies in the emergency imaging of obstetric patients. The opening chapter discusses general principles of emergency imaging during pregnancy and offers an overview of an evidence-based approach to imaging interpretation. The remainder of the book describes specific applications of ultrasound, MRI, radiography, and MDCT for the imaging of common as well as less common acute brain, spine, thoracic, abdominal, and pelvic conditions during pregnancy. Clear guidance is offered on the unique challenges that may be encountered during such imaging. Emergency Imaging of Pregnant Patients is written by a group of leading North American and European emergency and trauma radiology experts. It will be of value to emergency and general radiologists, to emergency department physicians and related personnel, to obstetricians and gynecologists, to general and trauma surgeons, and to trainees in all of these specialties.

Michael N. Patlas, MD, FRCPC, FASER, FCAR, FSAR, is a Professor of Radiology and Emergency/Trauma Division Chief at the McMaster University, Hamilton, ON, Canada. Imaging of traumatic and nontraumatic abdominal emergencies is among his main research interests. He has authored more than 220 peer-reviewed papers, chapters, and abstracts and edited three books. Dr. Patlas is a Program Chair for the Annual Meeting of the Canadian Association of Radiologists. He is an Editor in Chief for the Canadian Association of Radiologists Journal and board member of American Journal of Roentgenology, Emergency Radiology and Current Problems in Diagnostic Radiology and a reviewer for ten journals.

Douglas S. Katz, MD, FACR, FASER, FSAR, has been the Director of Body Imaging and Vice Chair for Clinical Research and Education at Winthrop University Hospital (now NYU Winthrop Hospital), Mineola, Long Island, New York, USA, since 1999. He has also been Professor of Radiology at the State University of New York at Stony Brook's School of Medicine since 2003. Dr. Katz has co-authored more than 800 publications (H index: 40; 6300+ citations) and abstracts, as well as two books, multiple book chapters, and several syllabi. He has been attending of the year five times and has received top academic awards at his institution. He is a Past President of the Long Island Radiological Society. Dr. Katz has been an RSNA Honored Educator twice. He has numerous editorial and organizational roles, including at the RSNA, the ARRS, the ACR, and the American Society of Emergency Radiology.

Mariano Scaglione, MD, FASER, FESER,FESGAR, is Head of the Radiology Department at Pineta Grande Hospital, Castel Volturno, Italy and also a Consultant Radiologist at the Sunderland Royal Hospital, UK. He has delivered more than 100 presentations at international meetings and published more than 120 papers. He has also edited 12 books and has been the lead author for 32 book chapters. Dr. Scaglione was also the Guest Editor of four themed emergency radiology issues in various radiology journals (Eur J Radiol 2006 and 2008, Radiol Med 2015 and BJR 2016). He is an editorial board member for many radiology journals, including Emergency Radiology, the official journal of the ASER. He served as Chairman for the Emergency Radiology Subcommittee at ECR 2012, President of the Italian College of Emergency Radiology (SIRM) from 2010 to 2014, and ESER President from 2015 to 2017.