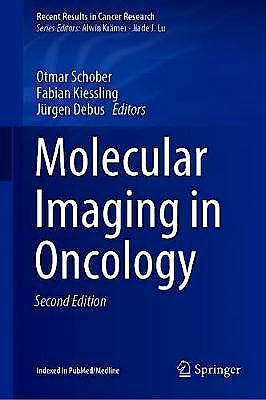 This book discusses the most significant recent advances in oncological molecular imaging, covering the full spectrum from basic and preclinical research to clinical practice. The content is divided into five sections, the first of which is devoted to standardized and emerging technologies and probe designs for different modalities, such as PET, SPECT, optical and optoacoustic imaging, ultrasound, CT, and MRI. The second section focuses on multiscale preclinical applications ranging from advanced microscopy and mass spectroscopy to whole-body imaging. In the third section, various clinical applications are presented, including image-guided surgery and the radiomic analysis of multiple imaging features. The final two sections are dedicated to the emerging, crucial role that molecular imaging can play in the planning and monitoring of external and internal radiotherapy, and to future challenges and prospects in multimodality imaging. Given its scope, the handbook will benefit all readers who are interested in the revolution in diagnostic and therapeutic oncology that is now being brought about by molecular imaging.

Otmar Schober was Director of the Department of Nuclear Medicine at the University of Munster from 1988 to 2013 and Deputy Rector of the university from 1994 to 1998. He has extensive expertise in the natural sciences and clinical medicine and has focused on imaging methods and their implementation in preclinical and clinical applications. Professor Schober completed his studies in laser physics with Herbert Welling and in surface physics with Nobel Laureate Gerhard Ertl at the Universities of Hanover and Munich. He received his medical training in Frankfurt, Hanover, and London; Heinz Hundeshagen was his mentor. From 1995 to 2003, he was a German Research Foundation expert reviewer for Radiology, Nuclear Medicine, and Radiation Biology. He has served as Editor-in-Chief of the Journal Nuklearmedizin (2001-2011) and as a coeditor of various international journals. Professor Schober served as coordinator of the Collaborative Research Center on Molecular Cardiovascular Imaging from 1999 to 2013. As a founder of the European Institute for Molecular Imaging, he was the principal investigator at the Cluster of Excellence "Cells in Motion."

Fabian Kiessling leads the Institute for Experimental Molecular Imaging at the RWTH University in Aachen, where he is working to develop novel diagnostic and theranostic concepts, probes, and technologies. Professor Kiessling studied medicine at Heidelberg University and subsequently worked as a resident at the Department of Radiology, German Cancer Research Center (until the end of 2002). In 2003, he moved to the Department of Medical Physics in Radiology as leader of a Molecular Imaging Group. At the same time, he pursued his clinical training, becoming a board-certified radiologist in 2007. He is the author of more than 300 publications and book chapters and has been an editorial board member for various journals, including Radiology, European Radiology, Molecular Imaging and Biology, and Nanotheranostics. In 2019 he was featured as Highly Cited Researcher by Clarivate Analytics, as "World Expert" in nanomedicine and molecular imaging by Expertscape, and he has won a number of awards, including the Emil Salzer Prize for Cancer Research and the Richtzenhain Prize. Together with Professor Matthias Brautigam, he founded invivo Contrast GmbH, which distributes diagnostic probes for the preclinical market.