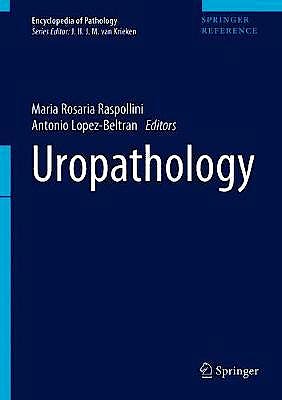 The book covers all relevant topics of uropathology (tumoral and non-tumoral), from the normal histology of the genitourinary tract to pathological findings of diseases in the male genital and urinary tract. To make the content more accessible, all content is arranged alphabetically and each entry is uniformly structured, presenting the epidemiology, the clinical signs, the gross and histological features, the immunohistochemical stainings, and the molecular data for each disease. Histological pictures clarify the microscopic findings and help readers understand the differential diagnosis for genitourinary tract diseases. In addition to internationally respected experts on pathologies of the prostate, bladder, kidney and testis, researchers coming from other disciplines such as molecular biologists, soft tissue pathologists, dermatopathologists, hematopathologists and gynaecopathologists have contributed to this book, thus making it interesting for uropathologists, but also for students, residents, clinicians (surgeons, radiotherapists, oncologists, urologists, dermatologists) and researchers who deal with disciplines that call for knowledge of the pathologies of the male genital and urinary tracts.

Maria Rosaria Raspollini graduated from the University of Florence School of Medicine, Florence, Italy in 1994 and was trained in Pathology at the same University's Institute of Pathology until 1998. She received her PhD in Human Oncological Pathology from the University of Verona Medical School, Italy in 2005. Since 2004, Dr. Raspollini has been a consultant pathologist at the Department of Histopathology and Molecular Diagnostics at the University Hospital Careggi of Florence, Italy. She is also a professor and tutor in Uropathology at the post-graduate School of Urology, University of Florence Medical School. From 2011 to 2013, she was Secretary/elected Chair of the Gynaecological Pathology Working Group of the European Society of Pathology, and since 2013 she has been Chair of the Gynaecological Pathology Working Group of the European Society of Pathology (ESP). Dr. Raspollini actively worked to finalize the Memorandum of Understanding (MoU) between the European Society of Gynaecological Oncology (ESGO) and the ESP and is the official delegate of the ESP to the ESGO. Since 2013, she has served on the Scientific Committee of the European Congresses of Pathology, helping to plan all gynaecopathology sessions and courses. She serves as a reviewer for 25 peer-reviewed journals, and has published more than 150 scientific papers and chapters in textbooks in the field of gynaecological and genitourinary pathology. In addition she is co-editor of the following textbooks: "Gynecologic and Urologic Pathology. Similarities, Differences and Challenges" with Antonio Lopez-Beltran for Cambridge University Press, UK (2017) and "Pathology of the Prostate: An algorithmic approach" with Antonio Lopez-Beltran, Liang Cheng, and Rodolfo Montironi for Cambridge University Press, UK (2017).