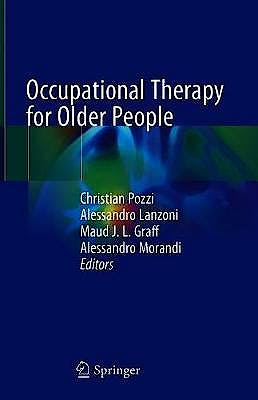 This book focuses on evidence-based occupational therapy in the care of older adults in different clinical settings, from home to acute hospital, from intensive care unit to rehabilitation centers and nursing homes. Occupational therapy has progressively developed as a new discipline aiming to improve the daily life of individuals of different ages, from children to older adults.

The ageing population requires new innovative approaches to improve the quality of life, and as such this book provides clinicians with handy, key information on how to implement occupational therapy in the daily clinical care of older adults based on the current scientific evidence.

Christian Pozzi is a Lecturer in Occupational Therapy at SUPSI - University of Applied Sciences and Arts of Southern Switzerland and he works with Centre of competence on aging of SUPSI. He is graduated BSc and MSc in Phisical Education at UCSC of Milan in 2004 and then graduated in Occupational Therapy at University of Milan in 2008 and earning his Specialization in Disability and Case Manager in 2015 at the UCSC Milan. He participated as author and coauthor in some international studies and author in some chapters in national publications. His current focus is the implementation of occupational therapy in the different care setting.

Alessandro Lanzoni: graduated in Occupational Therapy at the University of Modena and Reggio Emilia he also studied in Lund University (Malmoe, Sweden). He collaborated with associations of families of people with dementia before working at day-care centres in Carpi (MO) and in Suzzara (MN). He currently works at the NODAIA Dementia Unit, Private Hospital Villa Igea, Modena (IT) and as a freelance consultant and teacher. He participated as a coauthor to some national and international studies.

Maud Graff is a professor in Occupational Therapy at the Radboud Universty Nijmegen. She has an honorary associate professor at the Nottingham University. She published over 100 publications (articles, and books) and received seven science awards on the methodologically sound development, evaluation and implementation of occupational therapy and other psychosocial and rehabilitation interventions.

Alessandro Morandi is a geriatric consultant at the Department of Rehabilitation of the Fondazione Teresa Camplani (Cremona, Italy). He is the president of the European Delirium Association and an international delirium expert. He has led several research studies on delirium in critically ill patients and rehabilitation settings. His current research focuses on delirium superimposed on dementia and the improvement of care in geriatrics.