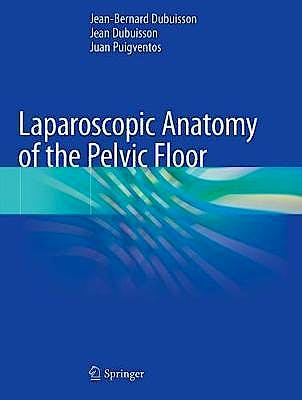 Laparoscopic Anatomy of the Pelvic Floor

1 Traditional anatomy of the pelvic floor
1.1 The muscles
1.2 The fascias

Gynaecological surgery has made tremendous strides in the last 30 years, due to advances in medical imaging, operative laparoscopy, and new types of prosthesis. Reconstructive plastic surgery of pelvic organ prolapse and of urinary incontinence have benefited from these developments. The laparoscopic sacropopexy and laparoscopic lateral suspension with meshes are two excellent examples.

In order to successfully perform these operations, detailed knowledge of the anatomy of the pelvic floor as "seen from above", i.e., from the abdominal view, is an invaluable asset. Achieving perfect knowledge of the anatomical details is now possible, thanks to laparoscopy. With the aid of laparoscopy, following subperitoneal dissections, reconstructive surgery of the pelvic floor can be made substantially more precise, more exact, and also more anatomical.

This atlas will allow gynaecologic surgeons to deepen and improve their anatomical expertise, with the aid of laparoscopy. It also describes in detail the most common laparoscopic operative techniques. The book represents a new and unique approach to anatomy studied in the living, and supplements the main content with a wealth of straightforward and clearly explained photographs.

"This book is suitable for any practicing general OB-GYN generalist and those interested in pelvic laparoscopy, including surgical fellows who have an interest in minimally invasive gynecologic surgery or female pelvic medicine and reconstructive surgery, OB-GYN residents, and medical students. ... This atlas is valuable and meets its teaching objectives." (Lisa Chao, Doody's Book Reviews, June 5, 2020)

Professor Jean-Bernard Dubuisson remains one of the great pioneers of surgical laparoscopy since the 1980s. He is recognized as an outstanding teacher in Europe and around the world and he has given hundreds of international conferences and trained a large number of gynaecologists.
Professor Dubuisson was appointed Professor of Obstetrics and Gynecology at the University of Paris in 1980 and at the University of Geneva in 2003. He was made Doctor Honoris Causa of the University of Athens in 2005, and Knight of the French Legion of Honour in 1996. Today Prof. Dubuisson is Honorary Professor at the University of Geneva, and holds numerous positions as Head of the Maternity Department, as well as in several French and international organizations (SFEG, SFCP, ESHRE, AAGL, Academie Francaise de Chirurgie, IRCAD). He is currently working at the Champel Institute in Geneva.

More than 300 international publications have been published during his academic career in gynaecological surgery (myomectomy, hysterectomy, endometriosis), reproductive medicine (microsurgery, IVF, ectopic pregnancy), urogynecology and pelvic anatomy. He initiated the first laparoscopic myomectomies in France and a new laparoscopic technique to treat genital prolapse in the late 1990s: laparoscopic lateral suspension, with a mesh size with excellent results that is now well developed in several countries.

Dr. Jean Dubuisson is part of the new generation of great European gynaecological surgeons expert in laparoscopic and vaginal surgery. His expertise extends from cancer to endometriosis and uro-gynecology.
Dr. Dubuisson graduated from the School of Medicine at the University of Lyon. He practiced between 2008 and 2012 at the University Hospitals of Lyon and Geneva. He learned and acquired extensive experience in laparoscopy, vaginal surgery, oncology and pelvic anatomy. He acquired many academic certifications, most of which are related to gynaecological surgery. Today he is head of the gynaecological surgery unit at the University Hospitals of Geneva, and he has published some fifty papers and made numerous presentations at congresses in Switzerland, France and abroad. He also organized several postgraduate training courses for gynaecologists and residents in Geneva.

Juan Puigventos is a researcher familiar with all the technologies related to uro-gynecology. By background, he is a former research chemist, particularly in new technologies for the fractionated production of human plasma (Swiss Institute of Serum and Vaccines Bern, Switzerland) and he is also a former molecular biochemistry researcher (CIBA Basel, Switzerland). He is also a former specialist in the sale of transplantation therapies (immunosuppression) (Fresenius, Switzerland), sales manager for surgical endoscopy (Olympus for Switzerland and Europe) and for new product development (pfm medical cpp SA Switzerland).