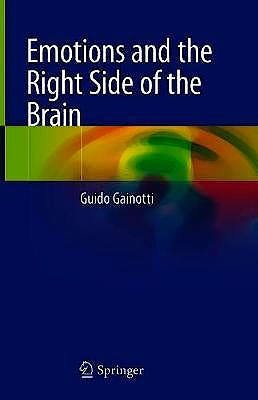 Emotions and the Right Side of the Brain

Introduction.- What are emotions?.- The emotional and the cognitive system.- Components and hierarchical organization of emotions.- Brain structures playing a critical role in different components and hierarchical levels of emotions.- Brain structures underlying the main components of emotions.- Brain structures involved in the highest levels of emotions and in the control of socially unacceptable emotional responses.- The history of research on emotional laterality.- The pioneers.- First interpretations of the different emotional behaviour shown by right and left brain-damaged patients.- Experimental and clinical investigations which have studied the non verbal communicative aspects of emotions.- Experimental and clinical investigations which have studied the autonomic components of emotions.- Possible implications for psychiatry of different models of emotional lateralization.- Recent trends in the study of the links between emotions and brain laterality.- Negative data obtained by functional neuroimaging studies of the neural correlates of emotions.- Laterality effects in brain structures playing a different role in emotional functions.- Emotional and behavioural disorders of patients with asymmetrical forms of Fronto-Temporal Degeneration.- General neurobiological models advanced to explain results obtained following these new lines of research.- A model based on the assumption of a primitive functional organization of the non-verbal right hemisphere.- A model assuming that different homeostatic models of awareness may originate from asymmetries in the peripheral autonomic nervous system.- Relationships between the lateralization of autonomic and of emotional activities.- Some psychopathological implications of hemispheric asymmetries for emotions.- The hypothesis assuming that major post-stroke depression and secondary mania may be caused respectively by left and right hemispheric lesions.- Psychopathological conditions in which a prominent role of the right hemisphere has been hypothesized.- Concluding remarks: Special relations between emotional system and sympathetic activities.

This book focuses on asymmetries in brain structure and their role in emotional functions (such as amygdala in emotional comprehension, the ventro-medial prefrontal cortex in the integration between cognition and emotion and in the control of emotional reactions, and the anterior insula in the experience of emotions).

The idea of hemispheric asymmetries in emotional comprehension and expression was first proposed about a century after the first studies showing that the left hemisphere is dominant for language, but it quickly became very popular. Initial investigations considered the right and left hemispheres as single functional units, but in the last few years several researchers have focused attention on asymmetries in brain structures playing a critical role in specific components of emotional functions.

Furthermore, interesting data have been obtained by studying emotional and behavioural disorders of patients with asymmetrical forms of frontal or temporal variants of fronto-temporal degeneration.

Elaborating on these subjects requires, on the one hand, a consolidated understanding of how models concerning the relationships between emotions and hemispheric asymmetries evolved in time and, on the other hand, a sound interdisciplinary knowledge of psychology (nature, components and hierarchical organization of emotions) and neuroscience (neuroanatomy).

This volume - intended for neurologists, neuroscientists and psychologists - pursues an organic and consistent approach to provide an overview of these complex and fascinating issues.

His research on the different emotional reactions of right and left brain-damaged patients allowed him to first advance the hypothesis of a right hemisphere dominance for emotional behaviour. He has also authored papers on topics such as: (a) the mechanisms underlying the unilateral spatial neglect syndrome; (b) the nature of semantic-lexical disorders in aphasia and in Alzheimer's disease; (c) the nature and the anatomical correlates of category-specific semantic disorders; (d) the mechanisms and anatomical substrates of familiar people recognition; (e) the mechanisms and anatomical substrates of multimodal people recognition disorders; and (f) the neuropsychological features that differentiate Alzheimer's disease from the other clinical forms of dementia and that best predict the progression from MCI to dementia.