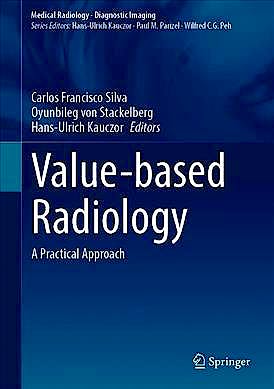 This cutting-edge guide to value-based radiology provides readers with the latest information on all aspects of the subject. Healthcare delivery is experiencing a rapid transition towards a value-based model, the underlying idea being that providers are paid on the basis of patient's health outcomes rather than the total services delivered. Radiology departments are facing many challenges as they attempt to improve operational efficiency, performance, and quality in order to keep pace with this transition. In the first part of this book, readers will find information on the theoretical basis and general concepts of value-based radiology. The second part focuses on value-based practice in specific areas of radiology: neuro/head and neck, thoracic, abdominopelvic, musculoskeletal, breast, cardiovascular, and pediatric. All topics are discussed by prominent experts in a clearly organized and well-illustrated form that will help readers to gain the most from each chapter. The book will be a valuable resource for radiologists and healthcare managers working in public or private institutions, as well as an excellent quick reference guide for all other physicians interested in the topic.

Carlos Francisco Silva, MD, who currently works in a research position at University Hospital Heidelberg, Germany, is a Portuguese board-certified radiologist with a special interest in value-based radiology and healthcare management. He studied Medicine at Coimbra University (2000-6) and started his medical career in 2007 at Santa Maria University Hospital in Lisbon (internship and radiology residency). In 2012, during the last year of his residency, he gained experience in the subspecialized field of Thoracic and Cardiovascular Radiology at Ronald Reagan UCLA Medical Centre in Los Angeles. In 2013 he gained both his national Board Certification in Radiology and the European Diploma in Radiology from the European Society of Radiology. He has since been active in the field of Clinical Radiology, but also in research and management, as a member of Quality and Management Section of the Portuguese Radiological Society. In 2017 he published a national pioneer study on value-based radiology in the most prestigious Portuguese indexed journal, Acta Medica Portuguesa. Oyunbileg von Stackelberg, PhD, is the scientific project manager at the Department of Diagnostic and Interventional Radiology, University Hospital Heidelberg, Germany. She received her PhD in molecular biology from the University of Hannover and completed her post-doc at the University of Freiburg. Moving from bench to bedside, she became involved in imaging, first at the German Cancer Research Center (DKFZ) and later at University Hospital Heidelberg. She is also a member of the Translational Lung Research Center Heidelberg (TLRC), the German Center for Lung Research (DZL), and the German National Cohort (NAKO). Her research focus is on population imaging, in detail standardization, incidental findings, cancer, and lung diseases.