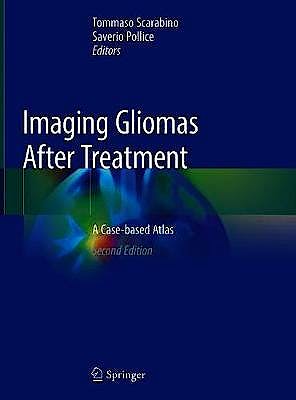 This book illustrates the characteristics of imaging after treatment in brain gliomas. It describes in detail the modifications to brain tissue, both healthy and pathological, that can manifest after surgery, radiotherapy or chemotherapy treatment. These modifications are discussed in terms of both how they occur in the immediate post-treatment period, and in the long term. The imaging methods used include CT with and without the addition of contrast medium, but above all MRI, which involves the use of routine basic sequences and mainly advanced study techniques such as diffusion, perfusion, spectroscopy and cortical activation. The aim of the text is to equip neuroradiologists with adequate expertise in post-treatment examinations reporting, allowing them to perform an effective differential diagnosis between the persistency or recurrence of illness and the effects of short or long-term treatment.

The book is divided into a general section, which addresses the classification of cerebral tumors, the surgical treatment options, radiotherapy and chemotherapy protocols; and a section on clinical cases that employs rich iconography, making it quick and easy to consult.

This second edition has been updated to reflect the new WHO classification system from 2016; new surgical, radiotherapy and chemotherapeutic treatment options; and (in the iconography section) the new sequences available from the manufacturers of RM scanners.

Tommaso Scarabino is currently director of the radiology department at the local health public company "ASL BAT" located in Andria (BT), Italy. He previously worked at the "Casa Sollievo della Sofferenza" hospital in San Giovanni Rotondo (FG), Italy, where he was director of the Neuroradiology Unit and mainly dealt with advanced imaging techniques in CT and MRI. He has led numerous scientific studies in the neuroradiological field making use (among the first in Europe) of a 3 tesla MRI scanner. He is the author of dozens of publications in the neuroradiological field in national and international journals, and has developed particular expertise in the study of brain tumors with advanced MR techniques such as diffusion, perfusion, spectroscopy and cortical activation. He is also the author of several textbooks, with a particular focus on post-treatment MR imaging. Currently, his primary focus is on refining advanced neuroradiological imaging techniques.

Saverio Pollice completed his fellowship in radiology at the University of Eastern Piedmont in Novara (Italy) in November 2007. Since January 2008 he has been working at the radiology unit of the "l. Bonomo" hospital ASL BAT Andria, Italy. His work mainly concerns MRI neuroradiological imaging, with a particular focus on brain tumor studies using advanced techniques. Over the years he has developed considerable expertise in vascular imaging with ultrasound, and in cardiology imaging with computed tomography. He is the author of several publications in the neuroradiological field, has edited or co-edited several books on radiology, and has participated as a speaker at dozens of conferences.