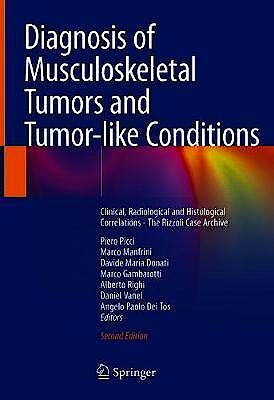 This book, now in a second revised edition, casts light on the often complex diagnosis of musculoskeletal tumors and tumor-like conditions by drawing on the experience of the Rizzoli Orthopedic Institute during more than 100 years of treatment and research in the field. The different entities are described from a multidisciplinary perspective, highlighting clinical, radiological, and histological correlations. Particular emphasis is placed on differential diagnosis, which often needs to take into account nontumoral conditions. The recent identification of further significant biological and genetic features, and the impact of these discoveries on the classification of round cell tumors, vascular lesions, and spindle/pleomorphic entities in bone, is also extensively discussed. The Rizzoli case archive dates back to September 1900 and contains the original material relating to more than 29,000 bone lesions and 11,000 soft tissue lesions. It is a fabulously rich resource, and this book will be invaluable for pathologists, radiologists, and clinicians at all levels of experience.

Piero Picci, MD, has spent his entire career at the Rizzoli Orthopaedic Institute in Bologna, first as a pathologist and then as an oncologist. He became Director of the Laboratory of Oncologic Research in 1995 and Vice-Director of the Department of Musculoskeletal Oncology in 1999. He was Vice Scientific Director of the institute from 1999 to 2002 and Scientific Director from 2004 to 2007. From 1982 to 1994 he was also a contract professor at the Postgraduate School in Oncology and Orthopaedics at the University of Bologna. Dr. Picci is the author of 500 publications on MEDLINE and has an h-index of 90. He has been President of the Italian Sarcoma Group and the European Musculoskeletal Oncology Society. He is an associate editor and reviewer for several journals and a project reviewer for international organizations.

Marco Manfrini, MD, was born April 30th, 1955. He obtained the Board of Orthopaedics at the University of Bologna in 1985 where he was trained by Prof. M. Campanacci, than he had a Reserch Fellowship in Orthopedic Oncology at the University of Florida , Gainesville (USA) in 1986-1987 with Prof W.F. Enneking. Since 1988 he has been promoting at the Istituto Rizzoli, the annual international Course on Musculo-Skeletal Pathology. He is actually in charge of the Specialist Referral Center "Innovative techniques in surgical treatment of musculoskeletal tumors of pediatric age"aggregated to the III Clinic of Orthopaedic Oncology at Istituto Ortopedico Rizzoli. He is author of more than 100 publications on international indexed journals and lecturer in more than 100 International Congresses. From the beginning of his career he dedicated to the original applications of biological techniques for reconstructive surgery in Musculoskeletal Oncology, especially in children and young adults.

Davide Maria Donati, MD, since 2012 has been Associate Professor of The Department of Biomedical and Neuromotor Sciences at Alma Mater Studiorum-Univeristy of Bologna and since 2016 serves as the Director of The III Clinic prevalently oncologic at Rizzoli Orthopaedic Institute in Bologna. His primary research and clinical interests relate to oncological surgery of bones and soft tissues, rare musculoskeletal diseases, regenerative medicine (osteonecrosis, cartilage defects, consolidation delay) and bone infections. He is the principle investigator and co-chair in numerous clinical trials within the Rizzoli Institute as well as in various research projects outside the Rizzoli Institute. He is author to more than 300 manuscripts including conference proceedings and journal articles in the fields of Biochemistry, Genetics and Molecular Biology- Medicine- Materials Science- Immunology and Microbiology- Engineering- Oncological Surgery.

Marco Gambarotti, MD, has been a pathologist at the Rizzoli Orthopaedic Institute in Bologna since May 2008. He has diagnosed more than 45,000 cases of bone and soft tissue pathology. Dr. Gambarotti is author or co-author of more than 80 scientific papers in national or international journals (h-index: 19). He is a member of SIAPEC - IAP (Italian division of the International Academy of Pathology), the Italian Sarcoma Group, the International Skeletal Society, the European Musculoskeletal Oncology Society, and AIEOP (Associazione Italiana di Ematologia e Oncologia Pediatrica). He is involved in the organization and management of the Rizzoli Orthopedic Institute's biobank in the National Network of Biobanks.

Alberto Righi, MD, PhD, is a pathologist in the Pathology Department of the Rizzoli Orthopaedic Institute in Bologna, where he is among those responsible for the molecular diagnostics of bone and soft tissue sarcoma and for organization and management of the institute's biobank in the National Network of Biobanks. Dr. Righi's scientific activity is focused on experimental and clinicopathological studies of bone and soft tissue tumors. In 2006 he received the Ugo and Evaristo Stefanelli Award for a scientific project on sarcomatoid carcinoma of the breast. He has been a collaborator on various studies funded by the Italian Ministry of Health and Universities, the Associazione Italiana Ricerca sul Cancro (AIRC), the Piedmont Region, and the Emilia Romagna Region.

Daniel Vanel, MD, is a professor at the Rizzoli Orthopaedic Institute in Bologna, Italy, where he is in charge of research and teaching on the imaging of musculoskeletal tumors. Dr. Vanel was previously Chairman of Radiology at the Gustave Roussy Institute, Villejuif, France and has also been Visiting Professor at the Hospital of the University of Pennsylvania in Philadelphia, USA. He is a former president of both the European Society of Musculoskeletal Radiology (ESSR) and the International Cancer Imaging Society (ICIS). Dr. Vanel is a gold medalist of the International Skeletal Society. He is a co-editor of a previous book on imaging strategies in oncology and is the author of numerous peer-reviewed journal articles.

Angelo Paolo Dei Tos, MD, is Professor of Pathology at the University of Padua School of Medicine and Director of the Department of Oncology and Director of Pathology at the General Hospital in Treviso, Italy. He is a consultant pathologist at the Rizzoli Orthopaedic Institute in Bologna. Professor Dei Tos is past Chairman and founder of the Working Group on Soft Tissue Tumour Pathology of the European Society of Pathology, past President of the International Society of Bone and Soft Tissue Pathology, panel member for the WHO Working Group for the Classification of Tumours of Soft Tissue and Bone, and past President of the Connective Tissue Oncology Society. He is a member of the editorial boards of several scientific journals and has published more than 280 peer-reviewed articles.