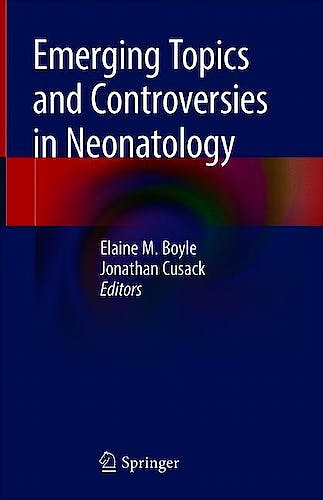 Emerging Topics and Controversies in Neonatology

This textbook addresses the themes that are at the forefront of neonatal clinical care and research, based on natural divisions in care during pregnancy, and postnatally by gestational age at birth. The book offers a unique approach, in that it proposes discussion of important general principles underpinning neonatal care that are not addressed in most general neonatology textbooks, such as ethical issues, counselling, effective training methods, quality and safety, among other subjects. These are fundamental aspects and challenges that need to be appreciated by senior clinicians. A chapter authored by parents describing their perspectives of neonatal intensive care is unique and will be highly educational, with the potential to influence the way in which individuals view and deliver neonatal care.

The authors discuss common and important conditions, to promote adoption of sound evidenced based practice where this is available. However, where evidence is limited, as is the case in many areas of neonatal practice, the authors aim to encourage critical thinking and evidence appraisal, which are necessary skills for busy clinicians wishing to filter evidence to guide delivery of care.

This text is suitable for senior trainees wishing to pursue a career in neonatal medicine, early career neonatologists and paediatricians with an interest in neonatology. It is also of interest to established neonatologists wishing to update their neonatal knowledge. The content is based on the RCPCH Level 3 curriculum, and addresses important topical and/or controversial aspects of neonatal care.

Dr Elaine Boyle is a clinical academic in neonatal medicine at the University of Leicester. She graduated in Medicine from the University of Sheffield and obtained MSc, MD and PhD from the University of Edinburgh. Elaine is active in both clinical neonatology and neonatal research. Her main research interest is late preterm and moderately preterm birth, and she led the Late And Moderately preterm Birth Study (LAMBS), the first large UK population based study of birth at 32-36 weeks gestation. Other research interests include the assessment and management of neonatal pain and infant feeding, which were the focus of her MD and PhD theses respectively. Elaine has a large number of research publications and has contributed chapters to a number of medical texts.

Dr Jonathan Cusack MB ChB, MSc is a consultant neonatologist and the Head of Service and Lead for Education for the Leicester Neonatal Service. He graduated in Medicine from the University of Leicester and holds a MSc in Medical Education, awarded by the University of Nottingham and is nationally recognised as an expert in high fidelity simulation training. Jonathan is extremely active in the delivery of education to both undergraduate and postgraduate trainees, directing courses in Newborn Life Support (NLS) and Advanced resuscitation of the Newborn Infant (ARNI) both in the UK and in other European Countries. He was instrumental in the development of the ARNI course, and edited the first edition of the ARNI course manual. He has a number of research publications.