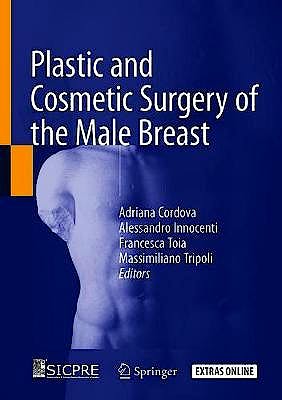 Plastic and Cosmetic Surgery of the Male Breast

The thorax has a fundamental role in the aesthetic of the male body: congenital or acquired alterations are experienced as extremely frustrating clinical situations. Most breast surgery texts briefly mention gynecomastia, but no text comprehensively addresses the male breast and thorax, including reconstructive and cosmetic surgery and surgery in transgender patients. This gap is now thoroughly filled by Plastic and Cosmetic Surgery of the Male Breast: after introducing principles of anatomy and aesthetics for the male thorax, the first part focusses on main congenital malformations and their treatment; main benign acquired pathologies and their treatment (including an ample section dedicated to gynecomastia), the carcinoma of the male breast, with reference to familiar forms; the treatment of carcinoma and reconstruction of the thorax and closes with a chapter will be dedicated to breast surgery in transgender patients.

While female breast surgery is increasingly practiced in specific Breast Units and highly specialized, male breast issues are treated in general and plastic surgeries. This handy volume is a sound reference for the most complex clinical cases, and the latest reconstruction treatments for the male thorax and will be useful for general and thoracic surgeons, plastic surgeons and senologists.

Professor Adriana Cordova is a reconstructive surgeon and full professor of Plastic surgery at the University of Palermo where, in 1984, she graduated in Medicine and Surgery. Professor Cordova completed the residency program at the Dermosifilofilopatic clinic in Palermo in 1987. In 1993 she completed a 2nd residency program in Plastic Reconstructive and Aesthetic Surgery at the University of Catania. She held a number of positions at the University of Palermo Policlinic prior to holding her current position there. In 2000 she acquired the certification from the European Board of Plastic Surgery (EBOPRAS). She has performed surgery in all areas of reconstructive surgery and microsurgery with a particular focus on: (a) surgery of the head and neck and oral cavity; (b) reconstructive surgery of the breast; and (c) surgical reconversion of sex in patients with gender dysphoria or chromosomal abnormalities. She has also conducted extensive research on the vascularization of the skin and muscles, contributing to the diffusion of new surgical techniques for the reconstruction of the nose, the oral cavity and the upper neck. Since September 2017, Professor Cordova has been President of the Italian Society of Plastic Reconstructive and Aesthetic Surgery, the first female surgeon in Italy to assume the role of President in an Italian scientific association of surgery.

Doctor Francesca Toia graduated at Medical School in 2007 in Palermo. She completed her training in Plastic Surgery at University of Palermo in 2013 and completed a phD course in "Experimental oncology and surgery" in 2017. She achieved the European Board for hand surgery in 2017. She has completed several international fellowship in Great Britain, Sweden, Switzerland,Spain and presented at several national and international meetings. She published more than 35 papers on international journals and is Associate editor for "Plastic and Aesthetic Reaserch" journal. Since October 2016, she works as a staff member in the Plastic Surgery Unit at Policlinico Universitario P.Giaccone, Palermo. Her main clinical interest are reconstructive microsurgery, limb and nerve surgery and her main fields of research are regenerative medicine and surgical oncology, for which she was awarded several national research grants.