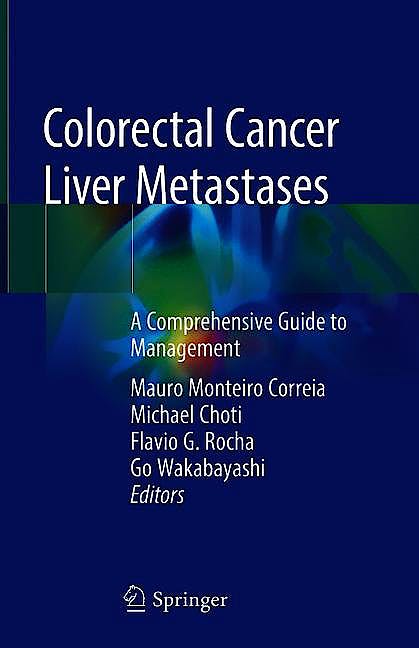 Colorectal cancer is the third most commonly diagnosed condition in oncology, affecting around 1.23 million individuals per year, according to recent statistics. Of these patients, about 50% will develop liver metastases and approximately 20% will present a stage IV disease at diagnosis. These statistics make colorectal liver metastases (CLM) an issue of major importance in current oncology.

The area of CLM is subject to great and continuous advances, as its pathophysiologic mechanisms are better understood and more therapeutic and surgical options are developed. Consequently, all professionals involved with the diagnosis, treatment and follow up of CLM should be kept up to date with the latest advances on the field, to provide high standard medical care to their patients.

Although comprehensive on the coverage and selection of topics, each chapter is concise and objective, dissecting topics in a practical and direct format. Evidences and recommendations are included. Chapters display a brief introduction of the common knowledge, go straight to the detailed revision of the most recent years of the literature, and end with practical closing observations.

This book is a tool for professionals (general and cancer surgeons, HPB surgeons, clinical oncologists, gastroenterologists and medical residents) and interns who search for a qualified and reader friendly revision on topics concerning Colorectal Cancer Liver Metastases.

Mauro M Correia, MD, PhD: MD from the Federal University of Rio de Janeiro State (Unirio, Brazil, 1984). He completed residencies in general surgery at UFRJ (1987) and in surgical oncology at the National Cancer Institute (Brazil, 1989). Master (1991) and PhD (1997) in general surgery from the Federal University of Rio de Janeiro (UFRJ, Brazil). Oncologic Digestive Endoscopy fellowship at UFF-INCA (1990). Observation HPB Fellow Scholarship at Memorial Sloan Kettering Cancer Center (USA, 1995). Postdoctoral fellowship at Wakefield Clinic (New Zealand, 2004). He coordinated the Medical Residency Program at the National Cancer Institute (Brazil), where he also founded the Liver Group and introduced ablative methods and IOUS. He founded the Brazilian Chapter of the IHPBA. He is a fellow of the Brazilian College of Surgeons, Emeritus President of the Brazilian Chapter of IHPBA and fellow of the Brazilian Society of Surgical Oncology. He has been head of the Surgical Department at UNIGRANRIO University for 18 years. His research has contributed to developing medical educational imaging, navigated liver surgery with augmented reality and epidemiological research on colorectal liver metastases. Dr Correia has coordinated the production of the first Treatise of Oncology in Brazil, gathering 400 national and international collaborators in 2013 and is author to other 10 books and 46 book chapters in Portuguese, Spanish and English in the area of Surgical Oncology (Gastric Cancer; Hepatobiliary Cancer Surgery). He has also written many scientific papers and is member of the editorial board of the REVISTA BRASILEIRA DE CANCEROLOGIA and ACTA SCIENTIAE ANATOMICA.

Michael A Choti, MD: Dr. Choti received his MD degree from Yale University, general surgery training at the University of Pennsylvania, and completed the surgical oncology fellowship at Memorial Sloan-Kettering Cancer Center before joining the division of Surgical Oncology at Johns Hopkins. Among his leadership roles, he was the Chair of Surgery at the University of Texas Southwestern Medical Center. Currently, he is the Chief of Surgery at Banner MD Anderson Cancer Center in Phoenix, Arizona. Dr. Choti is an active clinician and researcher with an interest in new approaches for the treatment of liver and colorectal cancer. He has served on various leadership positions in national and international societies and has chaired study sections for the American Cancer Society. He served as Chair of the NCI-CTEP Hepatobiliary Task Force as well as on the American College of Surgeons' Commission on Cancer, the GI committees of NSABP and ACOSOG, and the Colorectal Cancer Guideline Panel of NCCN. He has directed educational symposia and served on program committees for ASCO, SSO, AACR, among others. He also was a Section Editor for the Annals of Surgical Oncology. Currently, he is on the Surgical Oncology Board for the American Board of Surgery.

Flavio G Rocha, MD: Dr. Rocha is a surgeon in Seattle, Washington and is affiliated with Virginia Mason Medical Center. He received his medical degree from the University of Chicago Pritzker School of Medicine and has been in practice for 20 years. He completed a postdoctoral fellowship in tissue engineering and drug delivery (2003-2006), residency in surgery (2002-2008) and was chief resident in surgery (2008-2009) at Brigham and Women's Hospital, Harvard Medical School (USA) and fellow in surgical oncology (2009-2011) and in hepatopancreatobiliary surgery (2010-2011) at Memorial Sloan Kettering Cancer Center (USA). He is currently a surgeon at Virginia Mason Medical Center.