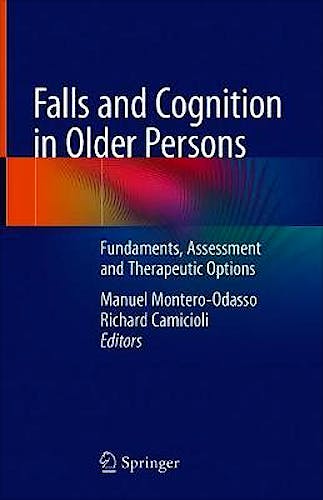 Despite of the enormous efforts of researchers and clinicians to understand the pathophysiology of falls in older adults and establish preventive treatments, there is still a significant gap in our understanding and treating of this challenging syndrome, particularly when we focus in cognitively impaired older adults. Falls in older adults are a very common yet complex medical event, being the fifth leading cause of death and a main cause of insidious disability and nursing home placement in our world aging population. Importantly, falls in the cognitively impaired double the prevalence of the cognitively normal, affecting up of 60% of older adults with low cognition and increasing the risk of injuries. The past decade has witnessed an explosion of new knowledge in the role of cognitive processes into the falls mechanisms. This was also accompanied with clinical trials assessing the effect of improving cognition via pharmacological and non-pharmacologic approaches to prevent falls and related injuries. Unfortunately, this revolution in emerging interventions left a gap between clinician-scientists and researchers at academic centers where the new data had been generated and the practitioners who care for cognitively impaired patients with falls. Most advances are published in specialty journals of geriatric medicine, neurology, and rehabilitation.

The aim of this book is to reduce this gap and to provide practical tools for fall prevention in cognitively impaired populations. The proposed book is designed to present a comprehensive and state-of the-art update that covers the pathophysiology, epidemiology, and clinical presentation of falls in cognitively impaired older adults. We additionally aim to reduce the knowledge gap in the association between cognitive processes and falls for practitioners from a translational perspective: from research evidence to clinical approach. We will address gaps and areas of uncertainty but also we will provide practical evidence-based guidelines for the assessment, approach, and treatment of falls in the cognitively impaired populations.

This book is a unique contribution to the field. Existing textbooks on fall prevention focus in global approaches and only tangentially address the cognitive component of falls and not purposely address special populations and/or settings as residential care and nursing homes. Due to the expected increase of proportion of older adults with cognitive and mobility impairments, this book is also valuable for the whole spectrum of the health care of the elderly. By including a transdisciplinary perspective from geriatric medicine, rehabilitation and physiotherapy medicine, cognitive neurology, and public health, this book will provide a practical and useful resource with wide applicability in falls assessment and prevention.

Dr. Manuel Montero-Odasso completed his undergraduate medical degree and his Doctorate in Medicine and Gerontology at the University of Buenos Aires, Argentina. His postgraduate medical training included residencies in Internal Medicine and Geriatric Medicine. He completed a postdoctoral clinical and research fellowship at McGill University, Canada, after which he obtained certification in Internal Medicine and Geriatric Medicine, by the Royal College of Physician and Surgeons, Canada. He is currently a Professor in the Departments of Medicine, and Epidemiology and Biostatistics at the University of Western Ontario, London, Canada. He is the director of the "Gait and Brain Lab" at Parkwood Institute, London, Ontario, where he established a successful Gait and Brain Health research program while remaining an active geriatrician. He focuses on gait performance research combined with neuroimaging as a methodology for the early detection and future prevention of the development of frailty, falls, and dementia in older adults. His clinical trials have applied the novel approach of "improving cognition to improve mobility" using pharmacological and non-pharmacological approaches such as physical exercise, cognitive brain and non-invasive brain stimulation. He is team leader in the Canadian Consortium on Neurodegeneration in Aging (CCNA), Canada's dementia research strategy and Team co-leader in the Ontario Neurodegenerative Research Initiative.

Dr. Richard Camicioli completed his undergraduate education in Engineering Chemistry at Queen's University in Kingston, Ontario. He trained in Medicinal Chemistry at McGill University where he completed his medical education. After completing a neurology residency at McGill, he obtained postgraduate research training in Geriatric Neurology and in Movement Disorders at Oregon Health and Sciences University and the Portland VA Medical Center in Portland, Oregon. He then assumed a faculty position as Assistant Professor at Oregon Health and Sciences University until 2000 when he moved to the University of Alberta, initially as an Associate Professor in the Department of Medicine (Neurology Division). He is currently a Professor and director of the Cognitive Neurology Program and an attending physician in the Movement Disorder Program. His major research interests relate to bio-fluid, gait and neuro-imaging biomarkers associated with cognition and functional decline in aging and in patients with movement disorders. He directs the Canadian Consortium on Neuro-degeneration of Aging (CCNA) Lewy Body Team.