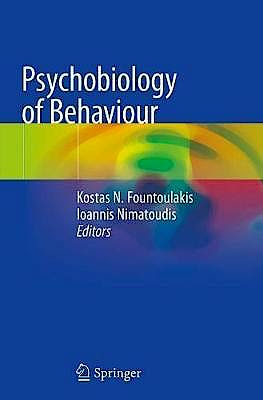 Introduction.- Functional anatomy of the human brain.- Memory-learning.- Basic vital functions and instincts.- Temperament-personality-character and evolutionary biology.- Sexuality.- Aging.- Substance use and abuse.- Sleep and dreams.- Genetics and behavior.- Psychobiology and psychoanalysis.- Psychophysiology.- The contribution of sociology, ethology and other disciplines.- Biological psychiatry and psychopharmacology.

The book provides a comprehensive reference on the neurobiological understanding of behaviour, how behaviour is regulated by the brain, and how such behaviours in turn influence the brain.

The work offers an introduction to neural systems and genetics/epigenetics, followed by detailed study of a wide range of behaviours - temperament and personality, instincts and drives, memory and cognitive function, sex and sexual differentiation, ethology and evolutionary biology, aging, drug abuse and other problematic behaviors, psychophysiology and ultimately the links to biological psychiatry and psychopharmacology. Research findings on the neural basis of social behaviour are integrated across different levels of analysis, from molecular neurobiology and neural systems/behavioural neuroscience to fMRI imaging data on human social behaviour. The content covers research on both normal and abnormal behaviours, as well as developmental aspects.

The target audience includes psychiatrists, neurologists, nurses, psychologists and all researchers and advanced students in behavioural, social and developmental neuroscience, as well as clinical neuroscientists.

Konstantinos N. Fountoulakis, MD, is Professor of Psychiatry at Aristotle University of Thessaloniki, AHEPA University Hospital, in Thessaloniki, Greece. He served as a medical officer in the Greek Armed forces and retired with the rank of major, and was a Research Fellow in the Department of Psychiatry, Division of Neuropsychiatry, at the University of Geneva in Switzerland. Dr. Fountoulakis' areas of clinical and research interest are reflected in the topics that he teaches: general psychiatry, biological psychiatry, psychopharmacology, mood disorders, schizophrenia and personality disorders. He is an active member of a number of national and international professional organizations, peer referee for the Cochrane Collaboration and especially active with the International College of Neuro-Psychopharmacology (CINP). In 2009, he was appointed member and in 2012-4 chair of the Greek Ministry of Health Committee for the Administrative, Economic and Scientific Supervision of the Mental Health Units of the deinstitutionalization project. In 2013, he was appointed chair of the Independent Committee of Experts for the Assessment of Mental Health Services of the Greek Ministry of Health. He chairs the ISNP and since 2006, he has served in the board of a number of Sections of the World Health Organization (WPA) to which is a honorary member since 2014. Dr. Fountoulakis is Editor in Chief of Annals of General Psychiatry and served as Section Editor of Current Opinion in Psychiatry. He has coauthored more than 350 papers delivered to congresses and more than 250 of them are published in international journals such as the LANCET, BMJ, Am J Psychiatry, British Journal of Psychiatry, Biological Psychiatry, International Journal of Neuropsychopharmacology, Journal of Affective Disorders, Schizophrenia Research, Psychiatry Research, Bipolar Disorders, and the Annals of General Psychiatry among others, with over 10,000 citations and h=49 (Google Scholar). He authored or co-authored a number of chapters in books including the Mood disorders chapter for the Wiki project of the World Psychiatric Association (WPA). He has authored the book Bipolar Disorders: An Evidence-Based Guide to Manic Depression (Springer-Verlag, 2015) and co-edited the 'Advances in Psychiatry vol III' (Springer 2018). He has received a number of national and international research awards, including the 2012 Kraepelin-Alzheimer medal of the University of Munich and the 2015 Excellence in Education Award of the WFSBP.

Ioannis Nimatoudis, MD received his medical degree in 1979 at the Aristotle University of Thessaloniki and became a specialist in psychiatry in 1984. He finished his PhD in psychiatry (1989) at the Aristotle University of Thessaloniki and he was elected as Lecturer in Psychiatry in 1991. Since 2011 he is Professor of Psychiatry at the Aristotle University of Thessaloniki. Since 2013 he is Director of the 3rd Department of Psychiatry at the University Hospital AHEPA, Thessaloniki, Greece and now he is Vice Chairman of the Aristotle's University Medical School. Since 1990 he is also an active member of the Health Committee for the Psychiatry Reform and the deinstitutionalization project of the Greek Ministry of Health. Since May 2014 he is President of the National Health Committee of the Greek Ministry of Health. Prof. Nimatoudis has been lecturing in Psychiatry since 1989 at undergraduate level, postgraduate level and in the training of residents in psychiatry. Prof. Nimatoudis' areas of clinical and research interest is: biological psychiatry, schizophrenia, mood disorders (especially bipolar disorders), psychopharmacology, and neuropsychology. He is the author or co-author of more than 250 papers presented to congresses and published in international and national journals.