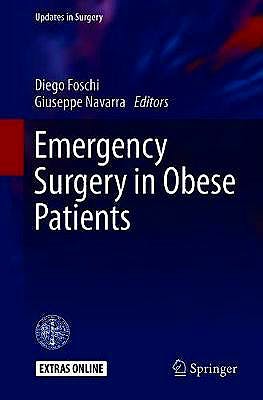 This comprehensive, multi-authored book covers all aspects of surgery on obese patients in emergency conditions.

Obesity is a metabolic disease affecting a high percentage of world population.. It involves marked anthropometric changes, affecting surgical practice and altering patients' ability to react to surgical stress. The prevalent comorbidities also affect the rate of complications and mortality after surgery. The obesity paradox, the ability of obese patients to survive emergency operations in spite of an increased risk of complications, is an effect of the widespread development of "Obesity Science". This volume discusses this science, examining the frailty of the obese patients and the main comorbidities that affect clinical practice, as well as the most frequent emergency situations after trauma, inflammatory diseases and the complications of bariatric surgery.

With contributions from leading experts, it provides clinicians with detailed and updated information for better practice in this emerging field of surgery.

Diego Foschi is a Full Professor of General Surgery at the Department of Biomedical Sciences `Luigi Sacco',University of Milan. In 2013 he became Head of the School of General Surgery, University of Milan, and from 2011 to 2018 he was Director of the Department of Surgery, L. Sacco Hospital, University of Milan. He subsequently became Head of the Unit of General Surgery 2 at the same University Hospital.
Author of 125 Scopus listed publications in general, bariatric, and oncologic surgery, he is Honorary President of the Societa Lombarda di Chirurgia and President-elect of the Italian Society for the Surgery of Obesity and Metabolic Disorders. He is also a member of the Italian Society of Surgery, the International Federation for the Surgery of Obesity and Metabolic Disorders, the International College of Surgeons, and the American Academy of Sciences.

Giuseppe Navarra is a Full Professor of General Surgery at the Department of Human Pathology of Adult and Evolutive Age `G. Barresi', University of Messina.

From 2008 to 2013 he was Coordinator of the PhD program in Clinical and Biomolecular Hepato-Gastroenterology and subsequently Director of the Training program in Visceral Surgery in the same University.