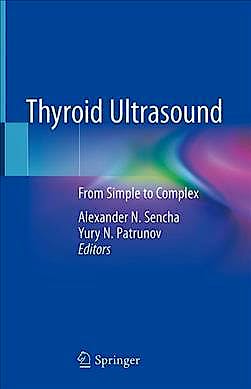 Thyroid Ultrasound. From Simple to Complex

This book is a wide-ranging and up-to-date guide to the use of ultrasound for imaging of the thyroid that will meet the needs of novices while providing more experienced professionals with advanced information. All of the techniques employed in modern thyroid ultrasound are covered, from conventional grayscale and Doppler imaging to elastography and contrast-enhanced ultrasound, with a focus on practical aspects and with detailed analysis of their diagnostic value and limitations. The characteristic ultrasound findings of the normal thyroid and a wide range of thyroid diseases and disorders are described with the aid of hundreds of high-quality images. Diffuse changes and thyroid lesions are discussed in depth, paying close attention to aspects of importance for early detection and differential diagnosis. In this context the authors summarize their personal experiences in the use of qualitative parameters of compression elastography and quantitative data of shear-wave elastography. In addition, a practical approach to the risk stratification of thyroid nodules is proposed. The book concludes with a resume of the main challenges and pitfalls in thyroid ultrasound.

Alexander N. Sencha is Head of the Department of Visual Diagnostics at the National Medical Research Center for Obstetrics, Gynecology, and Perinatology, Moscow, Russian Federation, having taken up this position in 2017. He started his career in radiology in 1993, focusing on early and differential diagnosis in oncology and thyroid pathologies. He earned his PhD in 2001. He has been a member of the Russian Society of Specialists in Ultrasound Diagnostics in Medicine since 1999, the European Society of Radiologists since 2005, and the Asian Society of Specialists in Ultrasound Diagnostics since 2007. He is the author of more than 220 scientific papers and publications, as well as 22 books on the application of modern imaging technologies. Yury N. Patrunov is Head of the Department of Ultrasound Diagnostics at the Center for Radiological Diagnostics at the Railway Clinic, Yaroslavl, Russia. He commenced work as a radiologist in 1999 and earned his PhD in 2000. From 2003 to 2007 he was Assistant Chair of the course on Ultrasound Diagnostics at the Faculty of Postgraduate Education, Yaroslavl Medical Academy. In 1999-2014 he has been a radiologist in Yaroslavl Railway Clinic focusing on ultrasound, and he took up his current position in 2014. Dr. Patrunov has been a member of the European Society of Radiologists since 2005. He is the holder of two patents and the author of 16 books in English, Russian, Korean, and Chinese as well as 177 scientific publications with a special focus on ultrasound imaging in thyroid diseases, endocrinology, and minimally invasive image-guided technologies.