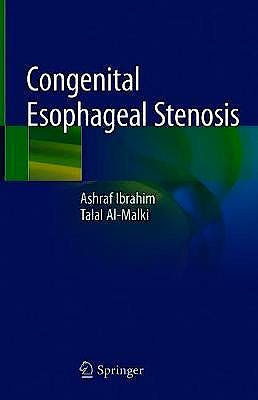 Introduction.- Basic notes about the esophagus.- Historical note about congenital esophageal stenosis.- Histology of the atretic esophagus.- Etiology of motility disorders in CES / EA.- Ultrastructural changes in EA.- The spectrum of CES.- Associated anomalies and CES.- Diagnosis of CES.- The esophagogram and differential diagnosis of CES.- Treatment of CES.- Esophageal dilatation and adjuncts to dilatation.- Gastrostomy .- The anti-reflux surgery.- Myotomy, myectomy and surgical resection.- Management of multiple lesions.- stricture after EA repair: etiology and role of CES.- The membranous type of CES.- CES in adults.- Conclusions and recommendations

This book is about the early diagnosis and management of cases of CES in children It starts by introducing the basic physiology of the esophagus and then goes on to discuss the different types of CES: tracheobronchial remnant, fibromuscular disease and membranous disease. The authors also introduce their pioneering diagnostic method using surgical specimens from the tips of the esophageal pouches during primary repair. The book also discusses the anatomical and structural changes in EA.

The reader will become better informed about management and different diagnostic and treatment approaches for CES and will learn how to improve the rates of morbidity and mortality. Pediatric surgeons and upper GI tract clinicians will greatly benefit from this publication.

Ashraf H. M. Ibrahim MD (Ain Shams university, 2000), FRCSI (Ireland 1998), Diploma in pediatric surgery (Great Ormond St, London University, 1990) I worked as a senior registrar in pediatric surgery (1994-2000) in Aseer central hospital which is affiliated to the faculty of medicine, King Khalid University in Abha, Saudi Arabia. I was promoted to the position of a consultant pediatric and neonatal surgeon (2000-2004). Then a consultant of pediatric and neonatal surgeon (2004 till now) in Armed forces hospital southern region, Khamis Mushait, Saudi Arabia where I established the pediatric surgery department in 2004. During the period 2004-2006, I was involved in pediatric surgery teaching for under graduate students in the form of lectures, bed side teaching and as an examiner in the mid-term and final year exams. For this, I was awarded the position of an assistant professor (Hon) for the above mentioned college. I am a peer reviewer for the Annals of Pediatric Surgery Journal and I have 25 publications. I attended 47 conferences as a speaker. I am a member in the Royal college of Surgeons Of Ireland, Egyptian pediatric surgery association and Saudi association of pediatric Surgeons.

Talal is a Professor and a practicing Pediatric and Neonatal Surgeon. He attained his training at Toronto and McMaster Universities in Canada, in addition to Great Ormond St. Children Hospital (University of London, UK). Professor Talal is the Founding Dean of the College of Medicine and the College of Pharmacy in Taif University, Kingdom of Saudi Arabia. For the last six years he is serving as the Vice President for Development and Quality in the same University, where he is responsible for ALL quality control activities in the University. Professor Talal has an admirable publication record, as he published more than 75 research articles and three book chapters. He is well recognized for his well-articulated and visionary talks, presentations and weekly columns in issues related to Higher Education, Leadership and Quality.